Your Bare Feet Betray You, Scientists Say. So Don't Take Off Your Shoes. 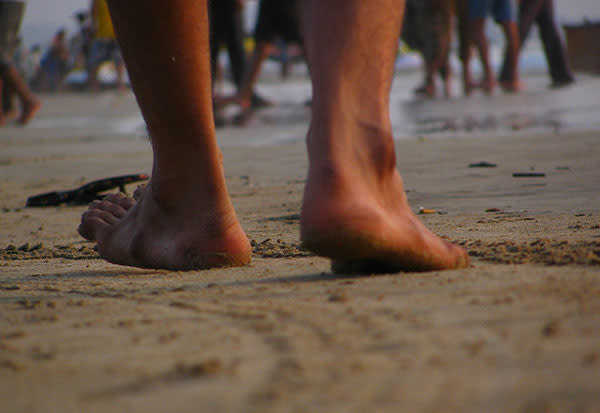 That's walking dangerously---better slip on your flip-flops to avoid the cops.

Your walk is surprisingly distinctive, and it's not just the way you waggle your fanny: it's how your feet touch the ground. Just a few steps is enough for a program to recognize you 99% of the time, report scientists who had more than a hundred people leave their prints on sensors. The goal? Identifying people through carpet, of course. In case you can't get to their fingerprints or retinas and so on. The team had their subjects stroll for five steps and got their software observe how people distributed their weight over the soles of their feet. Once the software had been trained, it was able to link a set of prints to the correct individual 99.6% of the time. This in and of itself isn't a shocker: Many studies have shown that people's walks are good identifiers. Using camera arrays or sensors on the floor, previous researchers have trained programs to recognize individuals up to 99% of the time. But those studies never involved more than 10 or 11 people, so it wasn't clear whether this level of accuracy was possible with a larger population. But there is one rather large fly in the ointment. This only works with no shoes on.And not only that, the results might change if people were walking faster or slower or were tired or stressed. Like when they're in an airport, or on the run from the FBI. Since one of the proposed applications for this work is identifying people "discreetly" in "security settings," you've got to wonder how they'd plan to get people to take off their shoes and walk naturally. Maybe you could use it to identify that secret yogi who's been creeping into your studio after hours. Five steps across the perfectly sprung hardwood floor and bam---you nab them mid-vinyasa. Reference: Pataky et al. Gait recognition: highly unique dynamic plantar pressure patterns among 104 individuals