You Can Turn Your Phone into a Credit Card with Google Wallet. Will You? 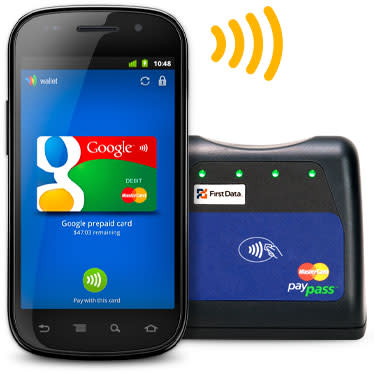 What’s the News: Your phone can now be a credit card, thanks to Google Wallet, announced yesterday with great fanfare. With this system, when you swipe your phone over a sensor, a near-field communication (NFC) chip gives the merchant your credit card information. You punch in your PIN, and: cha-ching. Google has partnered with 20,000 companies who will take payments this way, including Macy’s, American Eagle, and Subway. How the Heck: The NFC chip, which is only available in Sprint’s Nexus S phone at the moment, can only be activated by a merchant’s sensor (which means that no one can extract the information from your phone without one), and it’s only active when the phone’s screen is on, which is intended to prevent you from purchasing a sandwich with your butt when you sit down. What’s the Context: Other companies aren’t far behind. In fact, one of them says it has bone to pick with Google over this—PayPal has filed a suit

against the search giant and two ex-employees who are now heading up the department that produced Wallet: The suit says that the ex-employees disclosed PayPal trade secrets to Google and major retailers. Not So Fast: Sure, the idea is cool, and may eventually take over a good chunk of the market for processing payments. But it’s not like it will be spectacularly less tedious to use than a credit card, and NFC-based payment methods have crashed and burned before from lack of demand, in Europe and Asia. And what happens when your energy-gulping smart phone runs out of batteries? No more money for you? The Future Holds: Wallet is only available to Nexus users on the Sprint network, but Sprint is working on putting out more phones with the capability. Last year, AT&T, T-Mobile, and Verizon announced that they were also working on an NFC-based payment system (called ISIS

), and Apple is expected to include NFC chips in a future iPhone. But real futurists might want to note that have such chips in phones might be passé eventually. You can already get an RFID chip—the kind in some credit cards, which function a bit differently from NFC chips—injected into your pets for tracking, and it’s not too much of a stretch to see a chip inserted into your wrist, which you present to merchants for their scanning convenience. Image: Google