Would You Trust Your Life to a Vest Made With Bullet-Proof "Custard"? 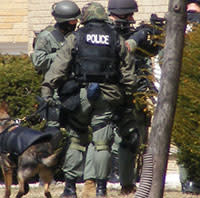 Facing enemy gunshots, which would you choose: the old stand-by Kevlar vest, or a new "liquid" suit? Ongoing research at BAE Systems suggests you might be wise to pick the latter. Recent tests, BAE researchers suggest, hint that a combination of liquid and Kevlar layers might stop bullets more quickly and keep them from going as deep. BAE tested each material's mettle by blasting them will ball bearings fired at over 600 miles per hour from a gas gun. The video, available on the BBC site, shows a side-by-side comparison of 31 layers of Kevlar and 10 layers of Kevlar combined with the liquid. Apparently, the liquid has a secret recipe for how it sticks together to absorb the bullet's force. Watching the video, it seems like non-Newtonian fluids are at work (everyday examples of non-Newtonians include ketchup and peanut-butter). Though a cornstarch and water mixture stiffens when you punch it, it's hard to see cornstarch making strides on the battlefield. Even if he can't divulge the details, Stewart Penny, a business development manager at BAE, told the BBC that the material is seriously sticky.

"It's very similar to custard in the sense that the molecules lock together when it's struck."

BAE also believes that the new liquid suit will be less cumbersome than traditional Kevlar suits--reducing soldiers' fatigue and also, given that it's liquid, improving their flexibility in the field. Related content: Discoblog: A Life-Saving Slime? Military Has Eyes On Bullet-Proof Gel Discoblog: How to Make a Bulletproof T-Shirt Discoblog: Are Bulletproof Turbans the Next Safety Gear for Sikh Policemen? Discoblog: NCBI ROFL: Best materials and methods ever.