Clever use of a microscopic resonator can quickly measure the masses of proteins and gold nanoparticles. 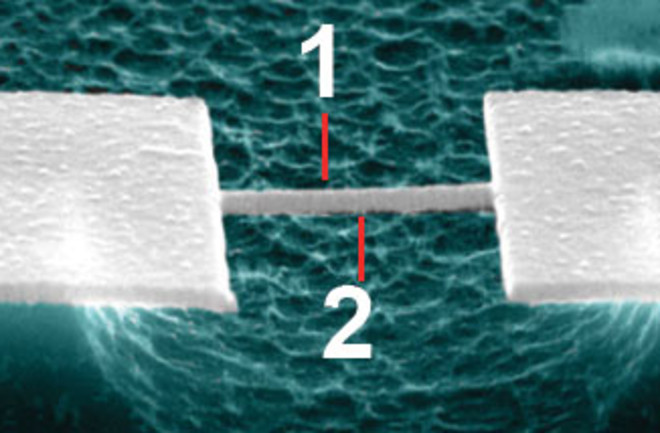 Physicist Michael Roukes and his colleagues at Caltech have developed a microscopic device that can measure the mass of a single molecule in real time. Chemists use such sensitive weighings to help determine the chemical identities of unknown substances. The Caltech team says that its system could eventually allow scientists to analyze thousands of different proteins in a matter of milliseconds using much smaller samples than before.

The device, a microscopic resonator measuring 2 micrometers long by 120 nanometers wide, consists of a metallic layer 1 on top of a silicon carbide layer 2, attached to a silicon substrate 3 by minuscule supports 4. To “weigh” a molecule, a solution containing the molecule is sprayed onto the resonator. When a single molecule lands on it, it causes a change in the way the resonator vibrates. The resonator is connected to an electric circuit that registers the vibration change and transmits it to computers that then calculate the molecule’s mass. Each time a molecule lands on the resonator, it produces a mass measurement; eventually, hundreds of molecules can pile up on the resonator, allowing the scientists to obtain additional data for increased accuracy.

So far, Roukes has used this system to measure the masses of gold nanoparticles and three proteins found in the blood serum of cows. He is now working on a resonator that can vibrate in more complex ways, yielding even more precise readings.