World's Teeniest, Tiniest Computer Fits on the 'N' of a Penny 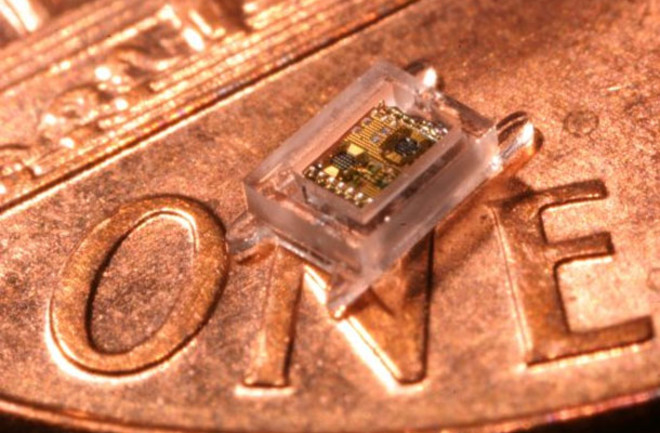 Back in the 1960s when mainframe computers filled entire rooms, the idea of sticking a computer in someone's eye would likely have sounded ridiculous--but that's just what scientists are planning to do. Researchers have unveiled an implantable computer system that's meant to monitor glaucoma patients' eye pressure. The University of Michigan researchers say it's officially the world's smallest computer. Measuring less than 0.04 inches long (or a little over one cubic millimeter), the entire computer packs a lot into a little space: It has a pressure sensor, a low-power microprocessor, a wireless radio and antenna that sends information to an external device, a battery, and a solar cell to charge the battery. It can store information for up to a week, and the system can link with other devices to form networks of wireless sensors. According to Live Science, millimeter-scale computers are a new technological frontier:

"When you get smaller than hand-held devices, you turn to these monitoring devices," said David Blaauw, a professor of electrical engineering and computer science at the University of Michigan who is working on the new tiny computer. "The next big challenge is to achieve millimeter-scale systems, which have a host of new applications for monitoring our bodies, our environment and our buildings."

This diminutive computer measures eye pressure every 15 minutes, using only 5.3 nanowatts of energy. Aside from being the first complete millimeter-scale computing system, this gadget has another distinction, according to Live Science:

"This is the first integrated antenna that also serves as its own reference. The radio on our chip doesn't need external tuning," said David Wentzloff, an assistant professor of electrical engineering and computer science at the University of Michigan. "Once you deploy a network of these, they'll automatically align at the same frequency."

The scientists' next goal is to make the device even more energy efficient, and they hope to make the device available to consumers in several years. And if this tiny technology takes off, you could see the same ideas used for other monitors, like tiny pollution tracking gadgets or other surveillance tools. Related Content: Science Not Fiction: I Compute, Therefore I Am 80beats: A Bronze "Computer" Helped Greeks Set the Schedule for the Olympic Games 80beats: Biocomputer Made of RNA Understands Boolean Logic DISCOVER: #45: Eye Drops Could Cure Glaucoma DISCOVER: 8 Ways to Restore Eyesight to the Blind (PHOTOS) Image: Greg Chen