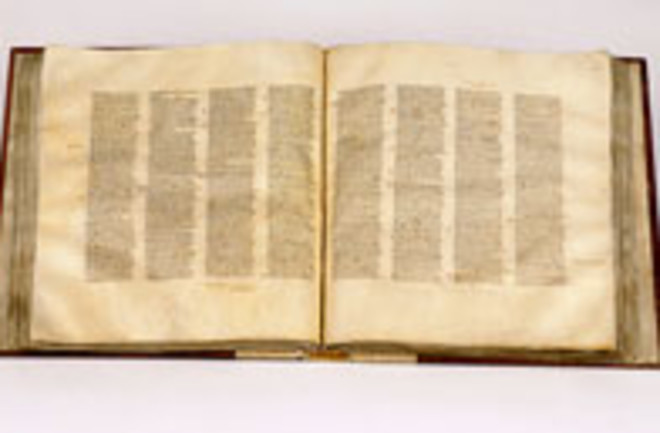 Science and religion may not have the smoothest relationship, but one thing the churchly crowd can hand to technology is its propensity for making religious texts available to the masses. Including, now, the world's oldest Bible. The Codex Sinaiticus, which before could only be read on leaves of animal skin, is now peruse-able in its entirety online. Reports the AP:

As it survives today, Codex Sinaiticus comprises just over 400 large leaves of prepared animal skin, each of which measures 15 inches by 13.5 inches (380 millimeters by 345 millimeters). It is the oldest book that contains a complete New Testament and is only missing parts of the Old Testament and the Apocrypha. The 4th-century book, written in Greek, has been digitally reunited in a project involving groups from Britain, Germany, Russia and Egypt, which each possessed parts of the 1,600-year-old manuscript. They worked together to publish new research into the history of the Codex and transcribed 650,000 words over a four-year period.

The parchment leaves contained around half of the Old Testament and Apocrypha, all of the New Testament, and two early Christian texts not found in modern-day translations. The first part of the Old Testament, from Genesis to 1 Chronicles, has been presumed to be lost for good. Still, that hasn't stopped people from running to their computers to read it: "There's a high demand," Codex Sinaiticus project manager Juan Garces told the AP. "Our Web site has crashed because people want to look at it." Related Content: Discoblog: Religion: A Tool to Keep the Parasites Away? Discoblog: No Time to Pray? No Problem! Your Computer Can Do It For You Reality Base: “PopeTube” Launches, Brings New Holiness to Internet Reality Base: One Religion that’s Actually Embracing Science: Buddhism