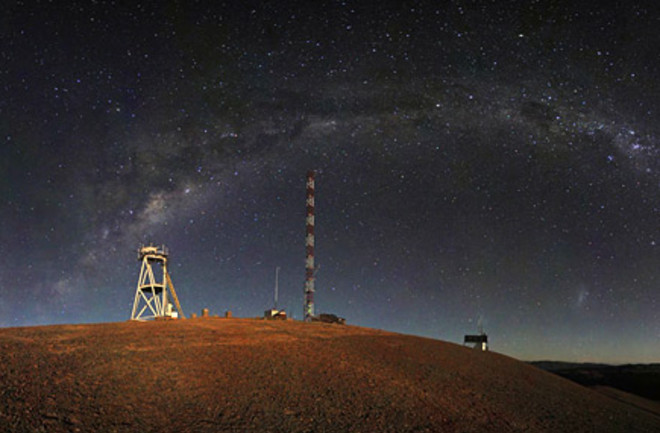 Plans for the world's largest telescope just took a major step forward. Researchers have selected a site for the European Extremely Large Telescope (E-ELT): It will sit on the Cerro Armazones mountain in central Chile's Atacama Desert. This site beat out other contenders, including other sites in Chile and La Palma in Spain, due to its excellent conditions for astronomy. On this desert mountain, researchers

will enjoy near-perfect observing conditions - at least 320 nights a year when the sky is cloudless. The Atacama's famous aridity means the amount of water vapour in the atmosphere is very limited, reducing further the perturbation starlight experiences as it passes through the Earth's atmosphere [BBC].

With such clear skies, astronomer Diego Mardones from the University of Chile remarked,

“If you want to find another [observation area] like Chile, your options are Antarctica or space” [Merco Press].

The telescope's primary mirror will measure 138 feet in diameter. The mirror

. Astronomers say the telescope will provide new information on the nature of black holes, galaxy formation, dark matter, and dark energy. The E-ELT, which is estimated to cost almost a billion euros, is expected to be operational by 2018. The final go-ahead for the telescope's construction is expected later this year. Related Content: 80beats: Astronomers Display the Eclipse of a Star With Amazing Thermal Images 80beats: Hubble 3D in IMAX: View of the Heavens in a Theater That’s Almost That Big 80beats: In a First, Ground-Based Telescope Measures Alien Planet’s Atmosphere 80beats: World’s Biggest Telescope Will Provide “Baby Pictures” of the UniverseImage: ESO