With SkinTrack, Your Arm is the Touchpad 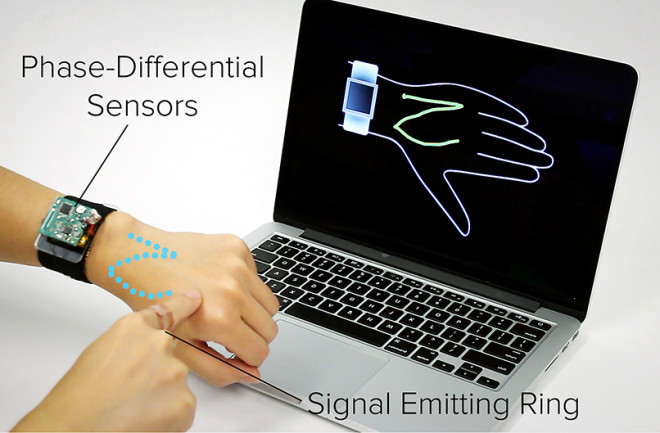 The SkinTrack in action. (Credit: Gierad Laput) When smartwatches started appearing on store shelves, there was one nagging question about the devices: "How can anyone play Angry Birds on this?" A solution is imminent. Researchers at Carnegie Mellon University's Human-Computer Interaction Group have made the process of flinging colorful birds at evil pigs as simple as stroking your forearm. The SkinTrack system has two primary components: a signal-emitting ring that's worn the index finger and a sensing band. The ring sends high-frequency electrical signals through the skin, and electrodes in the sensor band detect the signal's phase differences to track distance and movement.

As our devices shrink, researchers are looking for new ways for us to interact with a limited amount of real estate. This often means taking the surface of interaction off of our phones and tablets and moving it somewhere more convenient. Our skin conducts electricity, and touch-screens already rely on the minute electrical forces at the tips of our fingers to track movements. Moving the trackpad onto flesh was a logical next step. [embed]https://www.youtube.com/watch?v=9hu8MNuvCHE[/embed] In a series of functional tests using a smartwatch, the researchers had study participants play Angry Birds, scroll through playlists, play songs, and even type into a keypad using the back of their hand as a surface. In addition to tracking movements on the skin, their system can also tell when a finger is hovering just above the arm, which is useful for moving cursors around the screen. The researchers say their system can read movements with 99 percent accuracy, and with an average error of only 7.6 millimeters. The SkinTrack still works on hairy arms and through thin shirtsleeves, though it's accuracy diminishes slightly. The researchers recently presented their work at the Proceedings of the 2016 CHI Conference on Human Factors in Computing Systems.

Still Kinks to Iron Out

The signal-emitting ring is kind of bulky, and only lasts for about 15 hours, which is the biggest drawback at the moment. The researchers want to devise a more fashionable and durable signaling system in the future. Another hurdle to overcome is compensating for the natural variations in our skin throughout the day, such as changes in moisture levels and temperature which could alter its conductivity. Adding a Mylar skin to the sensors seemed to help, but the researchers say that they will continue to tweak their design. Even so, this is one of the most integrated and low-profile systems out there for turning our bodies into computer interfaces, the researchers say. Other designs rely on cameras, infrared sensors or artificial skin to perform the same functions. Researchers have also have experimented with using different parts of the watch strap and bezel to control movement. Another possible drawback: a round of Angry Birds thwarted by an itchy arm.