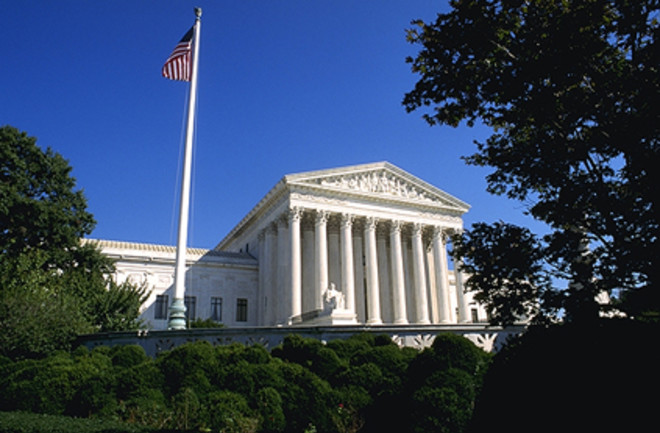 Today, video games have their day in court. The Supreme Court is going to hear arguments of a California law meant to restrict the sale of extremely violent video games to minors, and to punish those who do so by fine.

A 2005 California law prohibits selling or renting such games to minors based on legislative findings that they stimulate "feelings of aggression," reduce "activity in the frontal lobes of the brain" and promote "violent antisocial or aggressive behavior." The law never took effect because lower courts found it violated free-expression rights. In a 2009 ruling, a federal appeals court in San Francisco said the state provided no credible research showing that playing violent videogames harmed minors, and found the law was an unconstitutional effort "to control a minor's thoughts." [Wall Street Journal]

Despite the fact that this law was stuck down multiple times and so never went into effect—and the fact that the Supreme Court declined to hear related First Amendment cases—the court accepted this one.

One reason why the case has attracted an unusual amount of attention is that the Supreme Court's recent rulings, including the Citizens United decision, have been generally pro-free speech. Unless the court wanted to nudge First Amendment law in a more restrictive direction, the thinking goes, there would be no reason for it to accept the case in the first place. [CNET]

So what are the arguments for and against? Editorials in favor of the law, like the Washington Post's

, use the rationale that minors' rights are restricted all the time. Therefore violent video games are just one more thing that ought to be regulated out of their hands, along with alcohol, tobacco, and pornography.

That is not to say that the California law is perfect. For example, it does not specify who is responsible -- the manufacturer? the retailer? -- for affixing the "18" label to games. And its definition of "violent video game" could be deemed too vague to pass constitutional muster. The justices should give states the flexibility to enact restrictions on video game sales to minors, even if the California law proves unacceptable. [Washington Post]

However, similar laws in other states have not survived the scrutiny of the First Amendment.

Similar laws in Indiana, Illinois, and Washington have been struck down by federal courts. The courts' reasoning, which is pretty orthodox First Amendment doctrine, is that the statutes target speech on the basis of its content. Because they do so, they must pass "strict scrutiny"--meaning that the state must show that they advance a "compelling interest" of the state, and that there's no "less restrictive means" to advance that interest. It's a tough standard to meet. The courts have designed it that way over the years because, as they have read the First Amendment, the government needs a very, very good reason before it can ban speech it doesn't like. [The Atlantic]

To try to get around this, the California law relies on wording like "appeals to a deviant or morbid interest," or that violent games have no "serious literary, artistic, political or scientific value." That's because those are the kinds of arguments that passed muster in the past in rulings against pornography or obscenity. And then there's legislating from disgust, which the San Francisco Chronicle's editorial board apparently would like to do

The games are more than a test of the Constitution. Allowing children to thumb away at the controls that maim, torture and kill human figures comes with deadening side effects to a player's personality and outlook. The court should recognize what California saw in such games: lethal harm that merits a warning label. [San Francisco Chronicle]

if it so chooses, but it dodges the important question: Are the "deadening side effects" to personality and outlook that they claim—or the claims of antisocial behavior and reduced frontal lobe activity written into the California law—proven? Or do they simply stem from adults' anecdotal feelings of unease and traditional knee-jerk reaction to new forms of media? PC World reports

that a cadre of 80-plus scientists who filed an amicus brief with the court about this case argue that no, these links are far from certain.

"The courts were right to reject these studies because they do not even establish the 'correlation' between violent video games and psychological harm to minors that California says exists, let alone the causation of harm that, as respondent explains, the First Amendment requires," argues the brief. "Nor do the studies show a connection between playing violent video games and violent or aggressive behavior of minors, which explains why California disclaimed that interest below." [PC World]

in May after the Supreme Court first agreed to hear the case: You might not think that Grand Theft Auto IV is on the same cultural plane as Othello, but get over it.

California lawmakers may have been right when they decided that video games in which players kill and maim are not the most socially beneficial form of expression. The Constitution, however, does not require speech to be ideal for it to be protected. [The New York Times]

Related Content: DISCOVER: Video: Our expert panel on the future of video games