Will the LHC’s Future Cancel Out Its Past? 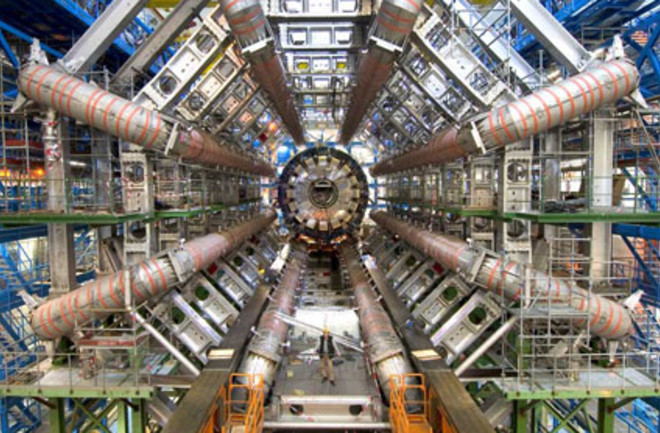 When the Large Hadron Collider at CERN turns on for the first time in September, scientists may discover exciting new particles that either solidify or shatter the laws of physics. But until that happens, we might as well revel at the outrageous, creative theories surrounding the super-speed particle accelerator. First we heard about the disaster that will occur when the LHC turns on, including miniature black holes that will swallow the planet; scientists quickly debunked that hypothesis. Now two physicists claim in a new study that no matter how hard we try, we may never turn the LHC on at all. The study is authored by Holger Nielsen and Masao Ninomiya, who argue that the very particles the LHC produces will prevent the accelerator from ever being used. Harvard post-doc and CERN collaborator Kevin Black relates their argument to the grandfather paradox—that a particle like the Higgs boson goes back in time and prevents its own birth (i.e. the future changes the events of the present). The authors reason that any accelerator which surpasses a certain threshold of super-high-energy collisions (thus producing many of these new particles) will never go into operation because it violates some yet-unknown universal law. As evidence, they provide the failed Superconducting Super Collider, which Congress canned in 1993 after spending $2 billion on the project. Because of these restrictions, they recommend that scientists run the LHC at lower energies than its potential. Furthermore, they ponder whether the outcome of a card game to determine the fate of the LHC would be influenced by future events. It’s hard to decide which LHC downfall scenario is the most implausible. But to play devil’s advocate, the LHC project has already been delayed, and anything can happen before scientists flip that switch in September. So who knows, maybe there's a chance that Nielsen and Ninomiya could be right: Perhaps the Higgs boson really is a suicidal version of Marty McFly from Back to the Future, unwavering in its quest to prevent its own birth. Still, we won't be holding our breath on September 10. Image: CERN