A very public online fracas takes place over a number of months. 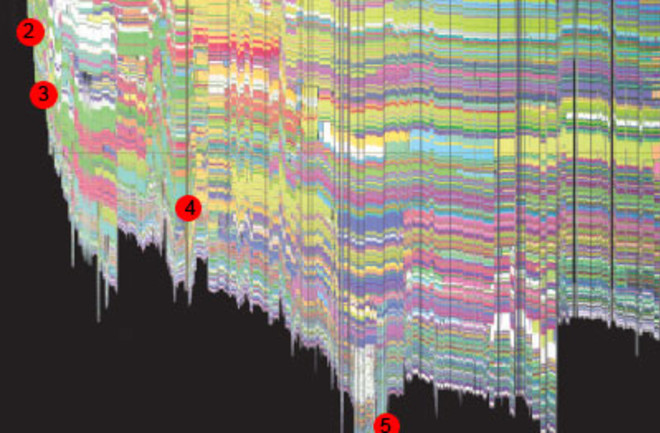 The entry for evolution on Wikipedia, the Internet encyclopedia that anyone can edit, was altered 2,081 times by 68 editors between December 2001 and last October. IBM's Watson Research Center produced this image, which tracks the transformation. Each vertical line is a new version; each color is a different editor.

The initial version of evolution, 526 words long, is posted by someone with the user name "Dmerrill." It offers links to pages for creationism and intelligent design but makes no mention of controversy.

An anonymous user redefines evolution as "a controversial theory some scientists present as a scientific explanation." Within two hours, it is changed to read "the commonly accepted scientific theory."

"Graft," shown in yellowish green, makes his debut. He will create 79 edits over three years and spend hours hashing out the content on discussion pages with pro- and antievolution editors. A biology grad student at Harvard University, Graft has edited more than 250 Wikipedia entries.

A black line occurs whenever the entire entry is deleted by a vandal. (Entries are also defaced with nonsense or vulgarities.) Editing Wikipedia has become such a popular pastime that, even with more than 1 million entries, about half of all vandalisms are corrected within five minutes.

The entry reaches its longest point, 5,611 words. That evening, 888 words are excised, causing a cliff like drop in the graph. The deleted text, a cynical passage about creationists, was cut by proevolution editors who insist on a neutral point of view.

A week before the intelligent design trial in Dover, Pennsylvania, begins, an edit war erupts when "Jlefler" writes that "a strong scientific and layman community advocate creationism." The phrase is removed or reapplied eight times in one hour, leaving a narrow yellow zigzag.