Why Beekeepers May Soon Be Strapping iPhones to Their Beehives 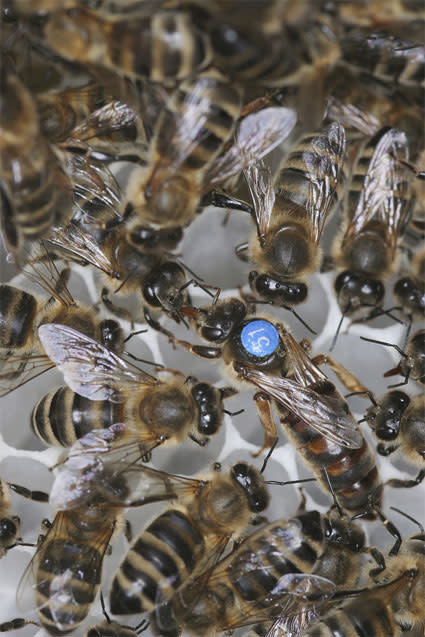 Do bees have a use for smartphones? Sure: Bee researchers have found a way to harness a smartphone's accelerometer technology to predict when the queen honeybee will leave her hive--thereby allowing keepers to thwart the loss of up to half their bees. In a phenomenon known as "swarming," the flight of a queen honeybee can lead to the loss of half of the hive. As the queen bee makes her exit, many of the bees follow their leader--and with the departure of both its queen and half of its workers, the remaining hive is severely weakened. But if beekeepers know when the queen bee will leave, they can attract the departing bees with another, strategically positioned hive. The art of predicting when a queen honeybee will leave has a long history. "In the spring time, many clues ... demonstrate the proximity to swarming, such as the presence of more or less mature queen cells," the researchers explain in their paper. "In spite of this the actual date and time of swarming cannot be predicted accurately..." But that was before beekeepers harnessed the power of smartphone technology. Led by Martin Bencsik, a researcher in England's Nottingham Trent University, a group of scientists secured accelerometers to two honeybee hives, allowing them to measure the vibrations created by all that buzzing. By linking the accelerometer to a computer, they were able to keep track of these bee vibrations for five months. As Bencsik tells New Scientist:

"The method relies on the computer learning the language of the buzzing hives," says Bencsik. The team found several signals in the vibrations – for instance, vibrations peak at sunrise – which could be used to monitor the health of a colony. Crucially, about 10 days before swarming, the hives produced a distinct vibration.

The study was a success, but only two hives were analyzed, which opens up a range of questions, including whether different beehives hum to different vibration patterns. Explaining his next step to New Scientist, Bencsik adds, "We want to see if each hive has its own language." Related Content: Discoblog: In Future Surveillance States, Will Honeybees Narc on Pot Growers? Discoblog: Bug Juice: Hornet May Turn Sunlight Into Electricity Discoblog: For Bees, Solving Tricky Math Problems Is All in a Day's Work DISCOVER: 20 Things You Didn’t Know About… Bees