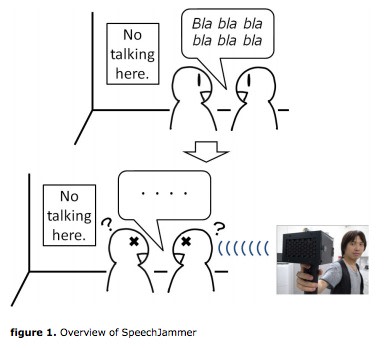 Who hasn't suffered a fool who won't shut up? Suffer no more---Japanese scientists have invented a portable SpeechJammer that they say can get someone to stop talking mid-sentence. The device described in a paper on arXiv

is nothin' fancy. It's basically a speaker and a mic that work together to exploit a neat psychological trick: if your speech is played back with a slight delay, it becomes really hard to keep talking. The SpeechJammer works with a delay of 0.2 seconds but anything up to 1.4 seconds

(pdf) also works. Because your brain relies on auditory feedback when you speak, the slight, very unnatural delayed feedback screws with the cognitive process. According to the authors, this technique also has the advantages of only affecting the speaker and afflicting no physical damage. Unfortunately, it doesn't work on non-word sounds, like yelling or humming. Sorry to get your hopes up, parents of screaming toddlers. If you haven't got a SpeechJammer handy, here's a neat way to test this trick yourself:

Ahh weird! The echo bot---designed to test audio and visual quality for videochatting---does exactly what its name suggests it does. But as it records your voice and spits it back out again, there's just enough of a delay to render you tongue-tied. We dare you to try it.