We're About to Run Out of IP Addresses. Is It Time to Panic? 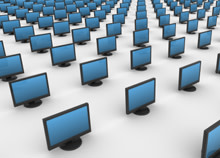 "IPocalypse." Disasters these days need a clever nickname, and so the worrying shortage of available new Internet protocol addresses now has one of its own. But what's going on here, and how worried should we be about the Internet rotting away? What's the problem? You probably don't have it memorized like your Social Security number, but chances are you're at least aware of your computer's IP (Internet protocol) address—the code that identifies an individual hardware device hooked up to the Internet. The problem is, that number isn't long enough. We're approaching the maximum number of possible address under the current system—quickly. Countdown clocks that track these addresses predict that the last huge blocks of them will be given out around the end of this month. When phone companies saw impending trouble in the past with too few new phone numbers available, they added new area codes to overburdened areas. But for Internet companies, it's not that easy: The current protocol, called IPv4, allows for just more than 4 billion addresses.

In this case, there is no plan B. Years -- decades, really -- of foot-dragging mean that the world's hardware manufacturers, OS coders, website builders and Internet service providers are stuck with the existing system. When the last block of IP addresses, as they're known, is handed out, that's it. [Technology Review]

Really? Just 4 billion? With world population creeping toward 7 billion and the percentage of people on the Internet skyrocketing, it seems terribly short-sighted to employ a system that allows just 4 billion addresses (which were subdivided early on into so-called "/8 blocks" of 16 million addresses each). The disconnect exists because we're still operating on a system that dates back to the dawn of the Internet, when its modern incarnation would be nearly inconceivable.

IPv4, instituted in 1983, allows for only about 4.3 billion addresses, and from the beginning there have only been 256 of the /8 blocks. Most are already allocated, and many are reserved for special uses such as multicasting of video streams. IPv6 has a much larger address space, which allows for an almost limitless number of unique addresses. The IANA allocates IPv6 addresses in a similar way to IPv4, except in much larger "/12" blocks. [PC World]

Whereas our current Internet Protocol uses a 32-bit address, the next version—IPv6—will use 128 bits.

The number of addresses that IPv6 allows for amounts to 340 "undecillion" (followed by 36 zeroes); enough for a trillion people to each be assigned trillions of IP numbers, according to ICANN chief Rod Beckstrom. "I guess if we could somehow link an IP address to every atom, we might begin to run into problems," Beckstrom said of IPv6 during an interview in his office in the Silicon Valley city of Palo Alto. [AFP]

So why don't we have IPv6 yet?Vint Cerf

, a father of the Internet who works for Google these days, told the Wall Street Journal in 2009

that a 128-bit system like IPv6 was considered back when the current standards were being developed in the late 70s and early 80s. But at that time, the need for 340 trillion trillion trillion addresses just seemed crazy.

Initially seeing the Internet as just an experiment that would eventually end, Cerf said he never anticipated the world would need more than the 4.3 billion addresses currently capable of being allocated. "Who the hell knew how much address space we needed?" Cerf said in an interview with journalists in Sydney, Australia. [CNET]

In the decades since, tech leaders haven't moved to IPv6 for pretty simple reasons: It's going to be difficult and expensive to make the transition, and as long as IPv4 addresses were readily available, it wasn't necessary.

The inevitable, of course, is an upgrade from the current Internet communications protocol, IPv4, to the next-generation standard, IPv6. The problem with that inevitability is that the price of switching to IPv6 is going to be so high - in terms of reliability, backwards-compatibility, actual money and a hundred other potential issues, that before the bulk of the users of the Internet are finally forced to switch to IPv6, the existing IPv4 network will probably have to degrade to some extent. [Technology Review]

Cerf is now an evangelist for IPv6. And his employer, Google, joins other Internet giants like Facebook in participating in World IPv6 Day in June, a worldwide test of the new protocol. IPv6 will, eventually, allow for a glorious Internet future. But what about right now—what happens when the current addresses run out? Sharing. First of all, the world isn't going to run out of IP addresses in a week. As noted above, the worry is over the last giant blocks of address being assigned to regional Internet authorities, a process explained nicely over at PC Magazine

. And big tech companies like Apple still have many addresses free from the blocks they were given in the Internet's younger days, Tech Review reports

. But if Internet providers begin to run low on new addresses before IPv6 is ready, they'll begin to use network address translation

, a trick to put more than one device to an address. Says Google engineer Lorenzo Colitti:

"You will start to share with your neighbors, and that causes problems because applications can't distinguish you apart," Colitti said. "If your neighbor ends up in a blacklist, you will too." "The Internet won't stop working; it will just slowly degrade," he continued, explaining that systems would eventually have trouble handling multiple connections on shared addresses. "Things will get slower and flakier." [AFP]

What, me worry? Despite that somewhat dire prediction, Colitti says that Internet users shouldn't freak out about the address shortage—though the tech companies are going to have to band together to make sure they ease a transition to a brave new IPv6 world. If they pull it off, people may not even notice the switch. But if they don't, it will be a rocky road to the future of the Internet. Related Content: DISCOVER: The "Father of the Internet" Would Rather You Call Him "Vint"

80beats: Will Wireless Carriers Soon Get Their Dream—Internet That Works Like Pay-Per-View?

80beats: 5 Reasons Super Wi-Fi Might Not Be So Super