We'll Be Chowing Down Electronics in No Time 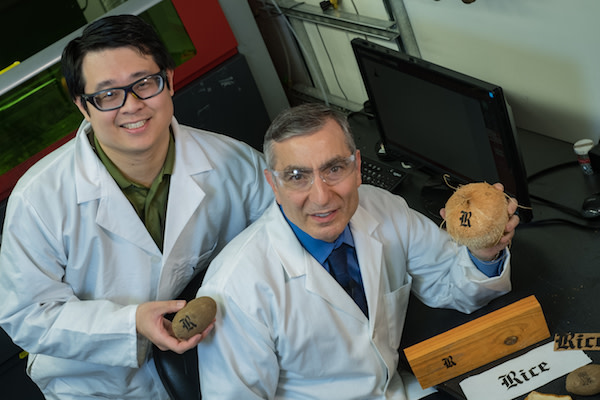 With the growing encroachment of Big Data and the Internet of Things and other digital buzzwords on our daily lives, it should be no shock that we’re now on the verge of literally eating the latest advance in electronics. It’s actually pretty neat. According to a study this week in ACS Nano, chemists have learned how to imbue a laser-branded conductive pattern onto anything containing carbon, including your dinner.

It’s all thanks to graphene, a pretty miraculous material we may have mentionedonce or twice before. The stuff is pretty much just a single layer — just one atom thick — of a 2-D hexagonal pattern of carbon atoms. It’s unbelievably strong, and conducts heat and electricity well, making it pretty popular in materials science labs. Scientists knew you could shine a laser onto certain materials to produce laser-induced graphene (LIG). It should be reasonable, then, to find a way to do that to anything with enough carbon in it. Eventually, the researchers figured out how to do it, using what the study charmingly calls “a multiple lase process.” First, they’d shine a laser onto the material to produce amorphous carbon — aka soot. Basically, they just char a tiny bit of the top layer of the stuff. But then the researchers shone a laser with a defocused beam over it all, turning the soot into graphene. The result is simple way to produce, at room temperature, precise patterns of graphene over a variety of materials, from food to cloth, paper, cardboard or even just coal.

This actually would be pretty useful, since LIG can function as supercapacitors, RFID tags, biological sensors and more. Food bearing the burn can track its own origins and how long its been sitting in the freezer, say. Or this could be a new way to tell at a glance if something is crawling with E. coli or other unwanted guests. It really is a new way of improving how much we can know and work with a variety of materials. Plus, think of the possibilities: Enjoy hearty giga-bytes of microchipped potato chips! Choose from some Big Data dates or a numerically precise pie, or electric elderberry! Mmm, science.