We Can Rebuild You: 8 Ways Science Can Fix Your (or Your Cat's) Broken Body

Star Wars, A.I., The Six Million Dollar Man, Star Trek and a host of other science-fiction films all share a particular futurist's dream: a broken body is repaired with artificial replacements. Reality is finally catching up with our imaginations. Stem cells, mind-controlled arms, osso-integrated prostheses, exoskeletons, and xenotransplants are here. It's important to note that most of these innovations are right on the cutting edge, either experimental, prohibitively expensive, or both. Individually they each may seem like small or too esoteric to matter, but as a whole, it looks like we're on our way to a very cyborg future. 1) Rex 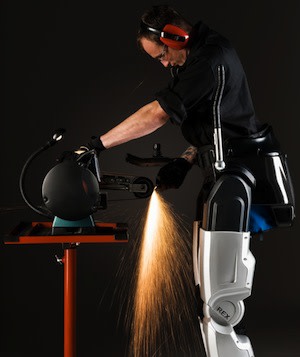 Rex Bionics has created what will be a commercially available set of robotic exoskeleton legs. The only currently existing set, custom built for Hayden Allen, allow him to walk up and down stairs and take awesome, super-mecha pictures like the one above. In an interview, he talks about basic quality of life issues (blood circulation, knowing when you have to go to the bathroom) that come from being ambulatory. Take that, paralysis! 2) Tooth Regeneration Have you ever had a cavity? How would you like it if you could just undo the cavity instead of getting a filling? Instead of drilling and filling, a gel containing the peptide melanocyte-stimulating hormone (MSH) could let teeth grow back from within! According to Discovery News "Previous experiments, reported in the Proceedings of the National Academy of Sciences, showed that MSH encourages bone regeneration." What good news! Now where is my barrel of Mountain Dew? 3) Organs to Order Right now two major universities, Wake Forest and Yale, are trying to grow organs in a lab to put in you. At Yale, Thomas Peterson's team is trying to master regrowing rat lungs. At Wake Forest, Dr. Anthony Atala's team is attempting to master growing, um, everything else. Peterson, and Atala, who has spoken at TED, are rightfully skeptical of speed but hopeful for the eventual success of their experiments. Before you take up smoking, Laura Niklason, the member of Peterson's team who lead the rat lung study, has a sobering statistic:

“I think that 20 to 25 years is not a bad time frame,” says Niklason. “I previously developed an engineered artery that will be ready for patients next year. It was first published in 1999. If an artery takes 12 years from first report to patients, then a lung will take 20-25.” 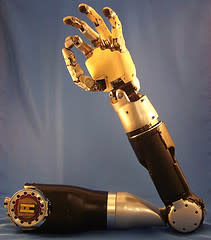 Dean Kamen isn't the only fella trying to replicate Luke Skywalker's amazing prosthetic arm. The good folks at Johns Hopkins University, working with DARPA--military funder of all things futuristic--have just received over 30 million bucks to continue developing and testing their own robot arm. The creatively named Modular Prosthetic Limb has 22 points of actuation, weighs as much as a human arm, and is uses mind control. For an idea of how mind-controlled prostheses work, check out the Dean Kamen DEKA "Luke" arm video and this surreal monkey robot-arm clip from the New York Times. 5) Osso/dermal Integrated Prostheses:Oscar the cat had a run in with a combine harvester that lopped off his back two feet. A British veterinary surgeon, Noel Fitzpatrick, decided to get the little black cat back to being a quadruped, and, in doing so, revolutionized prosthetics. One of the holy grails of artificial limbs is osso and dermal integration: that is, fuzing metal and plastic to the bone and having the skin grow naturally over it. Just look at the joy on Fitzpatrick's face when the bandages are removed from Oscar's stumps and, then again, when the cat has to be reined in because he's exploring a bit too heartily with his new kicks. 6) Replace Your Face: 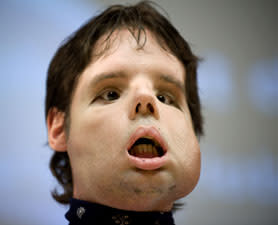 Another unlucky Oscar, in this case a frightful shooting victim, has had the first full-face transplant. Muscle, bone, nerves, blood vessels--the whole kit-and-kaboodle--has been replaced. The overwhelming complexity of the operation is a testament to the progress medicine has made. Oscar, as it would happen, lives in the organ donation capital of the world: Spain. ¡Olé! 7) HULC and SARCOS Lockheed Martin and Raytheon are racing to complete the first untethered, full-body exoskeleton. Both are working on military applications, as well as competing to see who can have the goofiest nu-metal music accompanying their dry, engineer-narrated videos of their exoskeletons (Lockheed's HULC and Raytheon's SARCOS) doing things like helping a soldier carry a bomb and shadow box. While still very, very early in the development phases, it's not hard to see where exoskeletons have a real potential to change the modern battlefield. 8.) All Together Now: Every one of these innovations is worthy of our awe independently, but considered together we have a rough picture of where medical, biological, and robotic science are flowing together. Even non-human breakthroughs, like Oscar the cat, herald great things: Noel Fitzpatrick, Oscar's surgeon, has a facility dedicated to animal prosthetics that is serving not only to help amputated animals but as a test bed for techniques which might one day be used to help people. Robotic exoskeletons like the REX, HULC, and XOS, combined with mind-synched technology, complex articulation, and osso-dermal integration pave the way for complete rehabilitation and mobility of those with traumatic amputating and paralyzing injuries and diseases. Coupled with lab-grown, transplantable organs and the necessary techniques to successfully complete even the most complex transplants, not to mention the ability to coax certain parts to heal themselves, and we have one amazing looking future. No one technology or breakthrough is going to change how we heal ourselves, but every year cyborg science-fiction gets a bit closer to cyborg science fact.