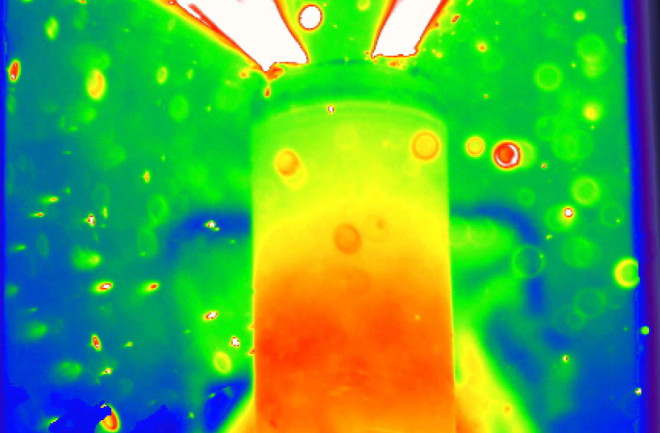 Jets of molten material shoot out of a battery after it overheats. (Credit: Shearing et al., Nature Communications) Lithium-ion batteries have drawn lots of headlines in recent years, and not in a good way. From the fires caused by the batteries in Boeing planes to exploding Tesla car batteries, these ubiquitous batteries powering our tech have shown they have a dark side. These fiery events are extremely rare. However, scientists want to understand why these explosions occur, especially since phones, tablets and automobiles will be increasingly reliant on these batteries in the future. And this week scientists took a big step toward discerning the root cause of blow-ups, by observing and recording a lithium-ion battery meltdown, for the first time, using X-ray vision.

The experimental design was quite simple: Scientists subjected two commercially available lithium batteries to external heat. Then, they filmed the batteries using thermal and high frequency X-ray imaging. The goal was to determine how, and when, a runaway reaction (aka, BOOM!) occurred.

Scientists found that lithium-ion batteries start to break down when temperatures reach 194 degrees Fahrenheit. As the temperature rose, thermal and chemical reactions inside the superheated battery produced gas pockets that deformed the spiral layers inside the cell. This set up a domino effect that led to higher temperatures and more gas. The gases built up until there was nowhere to go but out. When the battery literally blew its lid, hot gas and molten material jetted out. Meanwhile temperatures inside the cell hit 1,985 degrees — hot enough to melt copper — researchers reported Tuesday in Nature Communications.

Scientists hope their findings help engineers better understand the explosive personality of lithium ion batteries, and design safeguards against disaster. Future research may look into other common assaults, such as stabbing and crushing the batteries, to see how, exactly, they fail.