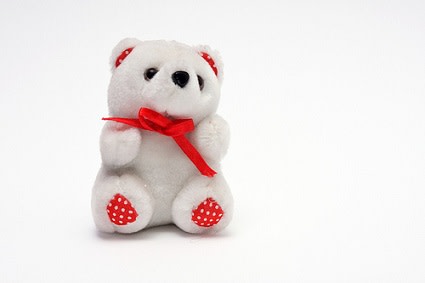 Tap that teddy bear and pay the price: $120,000. Or at least, that's what Dianna Divingnzzo and her father, Sam Divingnzzo, are due to pay out after being slapped with federal wiretapping charges. The fines arose from a custody case over Divingnzzo's daughter with ex-husband William "Duke" Lewton. After Lewton was awarded unsupervised visitation, Divingnzzo put a recorder inside her daughter's teddy bear (cutely, if not creatively, named "Little Bear") to document suspected physical and verbal abuse by Lewton. The recorder taped continuously, while Divingnzzo occasionally copied the files and sent them to her father for transcription. The Little Bear plan got hairy when Divingnzzo tried to use the material to win back sole custody, explains Ars Technica:

All of this material was then turned over to Dianna's lawyers, who submitted it to the state court and waited for a ruling on its legality. In the summer of 2008, the state judge decided that the recordings were not admissible as evidence in the custody trial, since they violated the Nebraska Telecommunications Consumer Privacy Protection Act and were therefore obtained illegally.

This also meant that Lewton and others recorded by Little Bear's prying ears had the right to sue Divingnzzo and her father. Recording technologies are so prevalent and simple to use that it's easy to forget that many recordings violate people's perceived privacy. The recorder-in-the-teddy trick garnered the Divingnzzos federal wiretapping charges

because it recorded conversations where none of the people involved knew they were being recorded. In 12 states (as us journalists know) it's illegal to record a phone conversation if any of the participants doesn't know about the recording. These wiretapping laws also apply to unauthorized monitoring of a computer's internet activity, including hacking of a WiFi device to monitor internet activity. In his his blog Internet Cases

No doubt this was a tough case – a parent fearing for the safety of his or her child might have strong reasons to resort to eavesdropping to protect the child. But the court was hamstrung – “[w]hile the notion that a parent or guardian should be able to listen to a child’s conversations to protect the child from harm may have merit as a matter of policy, it is for Congress, not the courts, to alter the provisions of the statute.”

Though, the court didn't seem that hamstrung when it dinged the Divingnzzos $10,000 per plaintiff

for each defendant, a total of $120,000, $20,000 for each of the six plaintiffs whose conversations had been recorded without their consent. Related content: Discoblog: Teen Sues Mom for Hacking His Facebook Account