Watch a Robot Navigate Tight Spaces Like a Cockroach 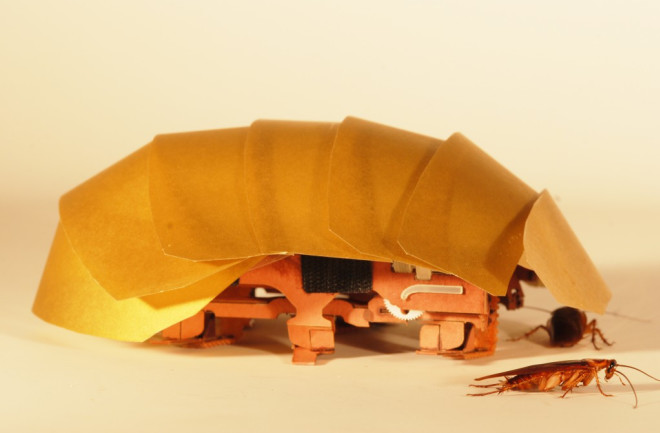 There's no hiding from cockroaches. In addition to their ability to survive extreme cold, lack of air and even radioactivity, they are adept shape-shifters, contorting their shelled bodies to slip through cracks and crevices one-tenth of an inch tall — about the height of two stacked pennies. Say what you will about cockroaches, but to engineers who design robots, these deft deformers are an inspiration.

Researchers at the University of California-Berkeley's Poly-PEDAL lab built a palm-sized robot that mimics the movements of a cockroach in order to squeeze through confined spaces. The aptly named CRAM (Compressible Robot with Articulated Mechanisms) robot sports a tough, yet bendable, shell and flexible legs that splay to the sides under pressure. The combination of features allows CRAM to squeeze through spaces only half its body height.

Researchers say CRAM could serve as tool for rescue workers who search for survivors trapped in wreckage rife with cracks and crevices that pose barriers to rigid-bodied bots. They published their findings Monday in Proceedings of the National Academy of Sciences.

Cockroaches consume a significant amount of researchers' attention at the Poly-PEDAL lab, which focuses on biomimicry research. In separate experiments, they've examined the way cockroach body motion affects their sensory organs and how they maneuver at high speeds.

In June, some of the same researchers that developed CRAM built a robot that borrowed a different aspect of cockroach morphology: their exoskeleton. By adding a rounded dome, similar to a cockroach shell, to a crawling robot, they discovered it would naturally tip its body to fit between obstacles that had previously stymied it.

The trick gave this tiny robot the ability to move in crowded spaces without any additional programming. Consumers can even buy a modified version of their cockroach-inspired robot. Our innate disgust aside, cockroaches possess a host of potentially useful adaptions that have allowed them to extend their domain over almost the entire planet — including our pantries.