Wash, Catalyze, Rinse, Repeat: Getting Filth-Munching Enzymes to Stick Around 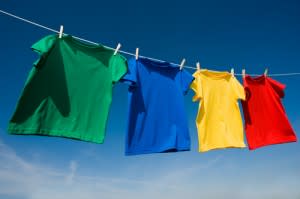 that chew the oil, sugar, and protein molecules in those stains right up. Enzymes are catalysts, which means they help the breakdown of molecules but they don't get broken down themselves. A protease will cleave a protein, emerge unscathed, and then happily go on to cleave another protein, again and again. But the enzymes that come in most laundry detergents get thrown out with each laundry load---tossing the enzyme-baby out with the washing machine water. Two chemists in Indian have found a way to reuse those enzymes

. Using some chemistry know-how, they found a way to make enzymes stick on a type of cheap, common plastic called PVC. The Economist's Babbage

blog breaks down how the method works:

The two researchers checked that by conducting the sort of test often seen in adverts for washing powder. They placed white cotton cloths stained with starch, grass, egg or mustard oil into the [enzyme-coated PVC] beaker. They then washed the cloths with cheap, non-enzymatic detergents inside the enzyme-coated beaker and compared the result with similar washing done in untreated beakers using either the same non-enzyme detergent, or an expensive, enzyme-containing detergent, or (as a control) plain water. After each wash they analysed the cloth for residual content from the stain: albumin from egg; cellulose from grass; and so on. The upshot was that the combination of the cheap non-enzymatic detergent and the immobilised enzymes in the beaker gave results four or five times better than those provided by pricey enzymatic detergents in untreated beakers. Moreover, the enzyme-treated beakers continued to work for up to 200 washes.

Laundry machines are obviously a lot bigger than beakers, so it'd be interesting to see how this method can get scaled up. For India where a lot of laundry is done by hand, the researchers also made enzyme-coated bristle brushes that turned out to be equally stain-busting. Whatever the ultimate device, enzymes make up significant chunk of the cost of laundry detergent---non-enzymatic detergent costs half as much---so getting more uses out of the same enzymes is a smart move.