Want More Oxygen for Your Workout? Pony Up $2700 for This Backpack 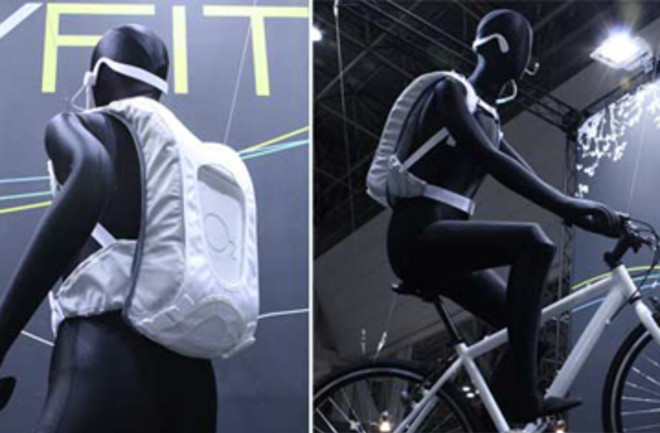 Here's a product for anyone who has ever huffed and puffed on the treadmill, while wishing they had done a better job of keeping fit. A new device called Oxyfit claims to make the workout experience a little easier by pumping oxygen-rich air directly into your breathing space. (Air out in the wild contains about 20 percent oxygen.) The increase in oxygen flow, claim the makers, will maximize your workout. Japan Trend Shop sells the product, and extolls the merits of Oxyfit:

Not only can this help with fatigue and other symptoms of low oxygen, but it can actually boost brainpower and metabolism as well. More oxygen lets you run farther, work longer, and even lose weight! An increased supply of oxygen speeds up your body's metabolic engine, burning more calories and stimulating fat loss. Finally, the improved circulation from increased oxygen levels can produce nootropic (brain-stimulating) and anti-aging effects (through increased moisturization of the skin).

Oxyfit doesn't come cheap. It's a whopping $2,681 plus $49 in shipping. For that money, marketers says you get an advanced electronic oxygen generation pack, a lithium-ion battery that provides 1.5 hours of run-time, a charger, and an oxygen tube. But the effectiveness of this expensive gadget is is up for debate. For years, athletes like biker Lance Armstrong have trained at high altitudes because the thin air causes the body to create more red blood cells that carry oxygen. This meant that when Armstrong competed at normal altitudes, his body was able to flood oxygen to his muscles. With an artificial oxygen unit, some argue, the body soaks in the available fresh oxygen from the kit, but as a result the body isn't prompted to produce more red blood cells. So a better alternative might be to forget the gadgets, and go for a jog in the mountains instead. Related Content: DISCOVER: High Altitude Determines Who Survives in Tibet DISCOVER: The Strange Process That Made Earth's Oxygen DISCOVER: Athletes On the Edge: Sword Swallowers, Arctic Swimmers, and Human CannonballsImage: Oxyfit