Virtual Reality Immersion Beyond the Headset 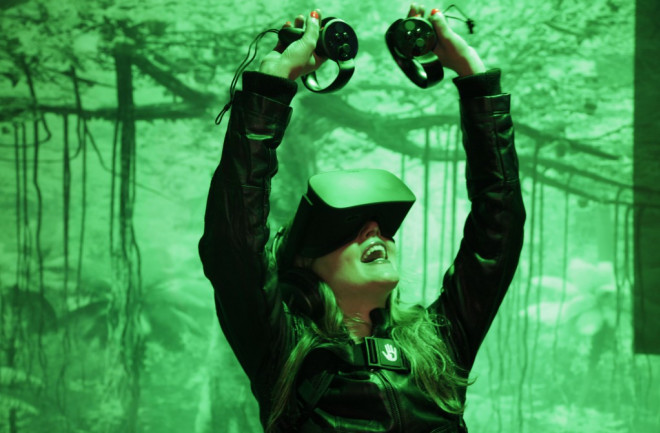 A person trying out the "Tree" virtual reality experience by the New Reality Company. Credit: James Orlando Virtual reality experiences can provide an uncanny sense of immersion that tricks participants' brains into believing they are walking on that narrow beam high above a city or are being chased by a monster through dark halls. The New Reality Company wants to push the boundaries of virtual reality by adding real-world props and additional sensory stimuli based on touch and smell--clever steps that can strengthen the power of immersion. Most virtual reality experiences begin with putting on the VR headset and end with taking off the headset when it's all done. The New Reality Company extends the immersive qualities and emotional impact of virtual reality storytelling by having participants literally step inside real world settings that resemble a cross between an interactive art installation and a minimalist stage production. Having a physical space that resembles the virtual world prepares people mentally for the storytelling journey before plunging them into virtual reality. That space also provides a gentler exit from the virtual world beyond just yanking off the VR headset and headphones. "We find that when people take off that headset they're still very much in that world," says Winslow Porter, co-founder of New Reality Company. "It's like when you wake someone up from a dream and it's only after a few minutes that they can acclimate themselves back to reality." The 1999 film "The Matrix" imagines a future where most humans live blissfully unaware that their minds have been plugged directly into a virtual world, called the Matrix, that seems practically indistinguishable from the real physical world. Awakening from that virtual reality and becoming conscious of the real world is portrayed as a traumatic experience for many who have never known life outside the Matrix. https://www.youtube.com/watch?v=r_O3k-RpV2c That science fiction vision of the Matrix remains a fantasy for now. But the New Reality Company founders are constantly thinking about how to provide smooth mental transitions between today's virtual reality experiences and reality. "It's really important to create an environment where [people] can sort of have like an intimate interaction with the content, so they can feel OK to cry or to be angry or feel frustrated with what's happening," Porter says. "Cause it's like if someone were to jolt you awake and you're in a bright room, that's very uncomfortable."

Living Through the Heart of Darkness

When the virtual reality experience called "Giant" premiered at the 2016 Sundance Film Festival, participants had the opportunity to enter a darkened room with a few chairs and a dim lightbulb that set the mood before putting on their VR headsets. During the experience, participants sat in haptic-equipped chairs that vibrated whenever a bomb blast went off inside the virtual reality experience. Those vibrations accompanied the sights inside the virtual reality experience of objects falling and the lights flickering inside a basement where a father, mother and their young daughter cower in fear during a bombing raid. That story draws inspiration from the life of Milica Zec, the second co-founder of New Reality Company, given her experience growing up in wartime Serbia. She and Porter provided a disclaimer up front by telling people interested in experiencing "Giant" that they are about to enter a war zone, lest the virtual reality experience trigger unwanted flashbacks for people who had already lived through such harrowing circumstances in real life. https://www.youtube.com/watch?v=BKvllm2PJ1w At the end, the real physical space of the darkened room allowed participants to collect their thoughts after having experienced the claustrophobic story of "Giant." It's similar to how some audience members will continue sitting through the film credits in the darkness of a movie theater after a particularly moving experience. "So you can feel those bombs and you can also see objects falling around you," Zec explains. "And then when you take off the headset you're still in that dark room; you have time to decompress and to leave that space whenever you want to leave the installation."

Standing Tall in the Rainforest

During the summer of 2017, the New Reality Company became designers-in-residence at the A/D/O design space in the Greenpoint neighborhood in Brooklyn, New York. They converted one corner of a large, sprawling warehouse-style room into an exhibit for their second virtual reality experience, called "Tree," by adding a backdrop of plants and foliage to create a jungle-style environment. Gabrielle Brown, an employee of New Reality Company, stood by with a variety of sensory aids on the day that I arrive to experience "Tree." Before starting the "Tree" experience, Brown gives me a small brown seed from a Kapok tree so that I can plant the seed in some soil. "You plant it because the piece speaks to nature and climate change, so we wanted to have something physical and not just technology talking about nature," Zec says. When I finally put on my VR headset and take hold of two controllers in each hand, I see that my viewpoint has transformed into that of the seed as it lay tucked away beneath the soil. Soon I have become a growing seedling pushing its way upward through the soil. Earthy smells drift past my nose as my viewpoint rises and the ground beneath me seemed to shake. I am living the growth cycle of a tree in fast-forward. https://www.youtube.com/watch?v=ERffRXjTAqM As my viewpoint bursts forth from the ground, I find that moving the VR controllers held in each hand allows me to swing around my virtual tree branches. I twist and turn to watch animals run by on the ground. Brushing against nearby trees causes flocks of birds appear to erupt from the foliage where I had apparently disturbed their rest. As I continue to grow beyond the top of the rainforest canopy, I feel the wind blowing against me as a real fan starts up on cue. The view from on high is spectacular. But as in the story of "Giant," the tale of "Tree" ends with a sobering reminder of mortality and life's fragility.

The New Reality Company is in the middle of production on a third virtual reality experience called "Breathe" that will be unveiled sometime in 2018. For this story, Zec and Porter hope to break some new ground in virtual reality storytelling by figuring out how to show a young six-year-old girl growing up as an adult. That may involve allowing the participants to manipulate space and time in clever new ways within the virtual reality experience. The story of "Breathe" will pick up immediately after the ending of "Giant" and form a trilogy of sorts with both "Giant" and "Tree." Zec envisions eventually exhibiting all three stories together in a large open space that gets divided into three main rooms. One room would be decorated as the basement from "Giant," another would be the rainforest from "Tree," and the third would provide the setting for "Breathe." Smaller rooms between each virtual reality experience could even display interactive maps of war zones (for "Giant" and "Breathe") or have other interactive displays to learn more about rainforest wildlife (for "Tree.") At the end of it all, a white space might act as a "decompression room" to give people some time and space to think about everything that has happened. "In a deeper philosophical way, 'Giant' is about how humans hurt each other," Zec says. "'Tree' is about how we humans destroy nature. And 'Breathe' is about some possible solution."

The virtual reality experience of "Giant" is available through the Within app if you have a standalone virtual reality headset or even a simpler smartphone-compatible VR headset. People without VR headsets can also watch "Giant" as a 360-degree video experience by downloading the Within app on their smartphone or watching through a web video player.