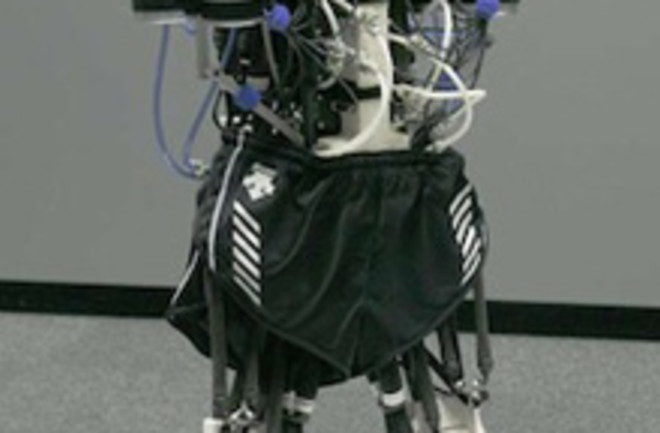 In pursuit of a glorious future in which robots can outrun humans (what could possibly go wrong?), researcher Ryuma Niiyama has unveiled Athlete, a bot that's intended to sprint. The bipedal robot's upper legs are modeled on the human musculoskeletal system, while the lower legs are fashioned from the spring-like blades that amputee runners use (and use so effectively that some have called the blades an unfair advantage). Erico Guizzo of IEEE Spectrum explains:

Each leg has seven sets of artificial muscles. The sets, each with one to six pneumatic actuators, correspond to muscles in the human body -- gluteus maximus, adductor, hamstring, and so forth.... The researchers are now teaching Athlete to run. They programmed the robot to activate its artificial muscles with the same timing and pattern of a person's muscles during running.

Niiyama described his bot at the IEEE conference on humanoid robots

last week, and has published a paper

(pdf) on the project in the journal Industrial Robot. The challenge is to get all those artificial muscles working in sequence as the bot bounds across the landscape. It's a big challenge. So far, Athlete can take only three to five steps before tumbling to the ground. Still that's pretty impressive compared to a hopping prototype from 2007 (seen in the video below), which took one great leap for robotics and promptly fell down. Humans, maybe you don't need to run for your lives just yet. Related Content: Discoblog: Brain Surgery Enables Woman to Run 100-Mile Races

80beats: Ostriches Are Endurance Runners, Thanks to the Spring in Their Steps

80beats: Running by the Books: Math for the Marathoner