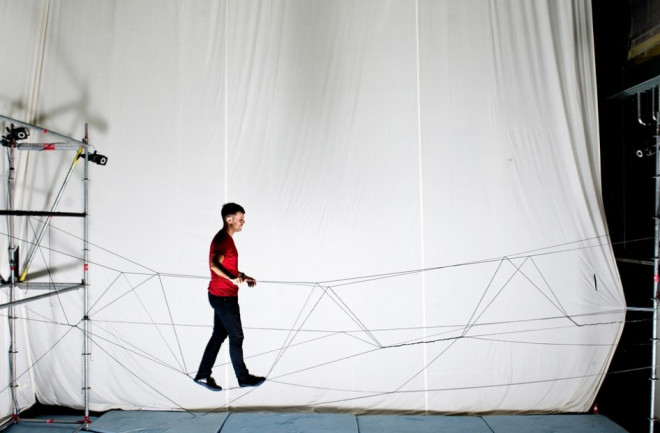 (Credit: ETH Zurich) Drones are really good at serving as our “eyes in the skies,” but, as it turns out, the flying machines are also pretty good construction workers. Engineers at ETH Zurich recently fired up their computers, as well as a team of drones, and set them to work with one task: build a bridge. The drones, equipped with spools of rope, then autonomously assembled a rope bridge that researchers subsequently walked across. Read that again and let that sink in.

Inside the Flying Machine Arena at ETH Zurich, researchers basically look for cool new ways to use drones. Here, drones dance, play catch and even play with building blocks. In their most recent demonstration, drones showed off their teamwork and knot-tying skills.

Once researchers fired up their drones and computers, the quadcopters went about their work on their own. The flight area is equipped with a motion capture system that constantly collects information about each drone’s position and attitude. That information is then fed into computers and algorithms parse the data to wirelessly send commands back to the drones. The drones weave in and out, up and down, and left to right in specific patterns to build braids and links in a rope bridge. When they finished, the end product was a rope bridge that spanned a 24-foot gap and could withstand a 5,200-pound load. Drones are already helping us view hard-to-reach places, and now, as you just saw, they can also help us get to those places.