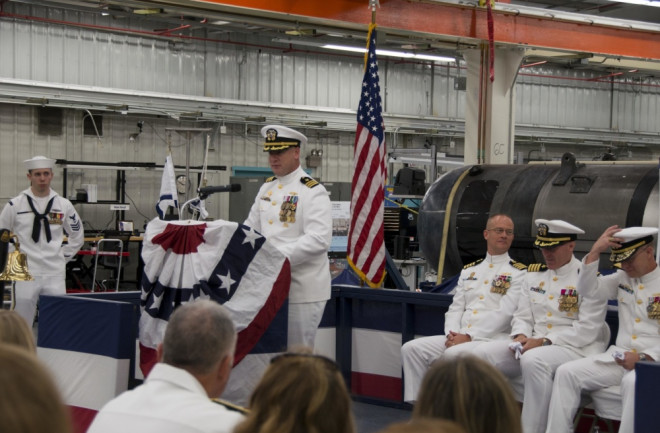 Cmdr. Scott Smith, from Hartford, South Dakota, delivers remarks during the establishment ceremony for Unmanned Undersea Vehicle Squadron (UUVRON) 1. UUVRON 1 was originally a detachment that fell under commander, Submarine Development Squadron 5. Credit: U.S. Navy photo by Mass Communication Specialist 1st Class Amanda R. Gray The U.S. Navy has taken another step forward in deploying swarms of underwater drones for both scientific and military purposes. This past week, the Naval Undersea Warfare Center officially recognized the Navy's first Unmanned Undersea Vehicle Squadron as likely the first of many military units dedicated to making use of undersea robots. Much of the Navy's existing underwater drone fleet with its scientific survey focus is operated by the Military Sealift Command on behalf of the Naval Oceanographic Office. By comparison, the newly inaugurated Unmanned Undersea Vehicle Squadron (UUVRON) 1 may take on a wider array of duties that include supporting U.S. Navy surface warships and submarines or someday directly engaging in combat with enemy vessels. The squadron is based on an unmanned undersea vehicles detachment of the Submarine Development Squadron (DEVRON) 5, which had already been operating for more than a year before getting official recognition as its own squadron. "Today we are transitioning our UUV detachment into the first UUV squadron," said Capt. Robert Gaucher, former commander of DEVRON 5, during the ceremony. "Why is this historical? It's because in standing up UUVRON 1, it shows our Navy's commitment to the future of unmanned systems and undersea combat." The U.S. Navy's gradual buildup of an underwater drone fleet—mostly smaller vehicles resembling torpedo-shaped tubes with fins—has mostly taken place without receiving the same media and public attention usually reserved for the U.S. military's use of flying drones such as the Predator and Reaper. One exception came back in December 2016, when a Chinese naval ship made international headlines by grabbing a U.S. Navy unmanned submersible being used for oceanographic surveys. President Trump, still U.S. President-Elect at the time, weighed in on Twitter: "We should tell China that we don't want the drone they stole back-[sic] let them keep it!" China did actually end up returning the underwater drone. But the U.S. Navy seems intent on expanding the mission of its underwater drones beyond oceanographic surveys for collecting data on ocean temperature and depth. The Navy has already been working with companies such as Bluefin Robotics and Hydroid on developing underwater drones to detect explosive sea mines--a job previously done in part by trained dolphins and sea lions. If U.S. Defense Advanced Research Projects Agency (DARPA) programs are any indication, a next step for underwater drones could involve hunting down and tracking enemy submarines. Whether they swim or fly, drones have been on the mind of the U.S. Navy for quite a long time. About 100 years ago during World War I, the U.S. Navy converted explosive torpedoes into flying biplanes known as "aerial torpedoes."