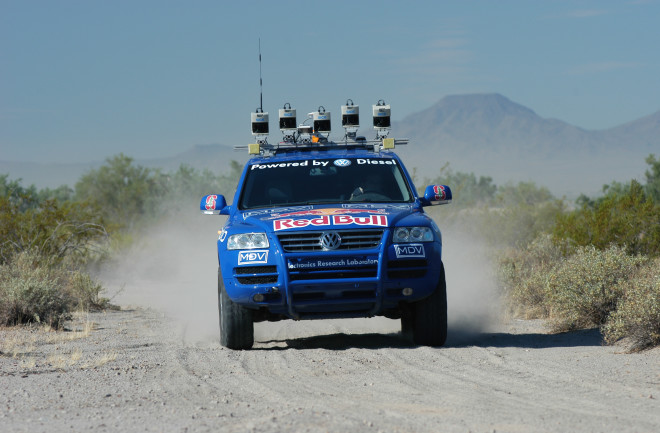 Has robot evolution hit its tipping point? The first DARPA Grand Challenge—a 2004 race of self-driving vehicles through the Mojave Desert sponsored by the Defense Advanced Research Projects Agency—was a well-publicized flop, with the best vehicle covering just one-tenth of the course. But in the second Grand Challenge, conducted with somewhat less fanfare last October, five cars completed the whole race, covering 132 miles of rugged terrain without any outside help.

A key breakthrough occurred when engineers realized the Grand Challenge isn't about the car. "This is really a software race," says Sebastian Thrun, director of the first-place Stanford Racing Team. So he and his colleagues focused on making their vehicle's Pentium-powered driver more like a human, allowing it to deviate from a rigid set of GPS navigational coordinates and to sense its own way through the desert. The group relied heavily on machine learning, a type of programming that delivers data by example rather than by instruction and that is widely used in speech-recognition software and Internet search engines. In the Grand Challenge, machine learning proved to be an ideal way for computers to emulate the flexibility and common sense that come easily to carbon-based drivers but are surprisingly hard for robots to master. "I would just sit in the car and drive, and the computer would monitor my driving and learn from it," Thrun says.

DARPA's primary motivation for the Grand Challenges is to meet a congressional mandate that one-third of all ground-based military vehicles be unmanned by 2015, but the success of the latest event is also having a big commercial impact. "Investment has increased vastly," says William "Red" Whittaker of Carnegie Mellon University, who led the second- and third-place Grand Challenge teams. "Robots are coming on strong in mining, farming, cleanup, and exploration, and automotive developers are all over this."

In the next few years, Honda, Toyota, and other companies plan to introduce automated lane-tracking systems that sound an alarm or take over the steering if a car starts to veer off the road. Next up, Whittaker predicts, are robotic cars that can drive themselves through stop-and-go traffic while avoiding oncoming cars and bad drivers. The lifesaving effects of such autonomous cars could dwarf the impact of DARPA's battle bots. "Forty-two thousand people died last year in America in traffic accidents, and maybe we could save 10 percent," Thrun says. "The Grand Challenge shows that it is possible."