Using a crystal and a rare earth element, researchers trapped laser light for an entire minute. 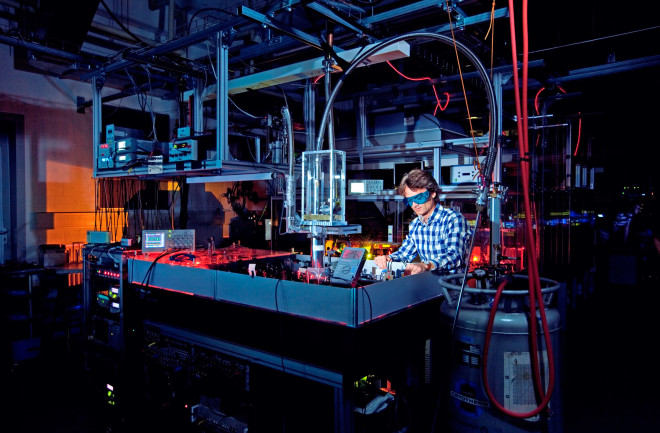 Light travels up to 186,000 miles per second — a speed so constant it is used to measure space. But in July, scientists reported that they’d brought a beam of light to a halt for a full minute.

Researchers at Germany’s Technical University of Darmstadt shone a laser onto a tiny opaque crystal studded with electrically charged atoms of praseodymium, a rare earth element. The “control beam” changed the crystal’s atomic and optical properties, making it transparent for some frequencies of light and drastically slowing their speed. After shining a weaker “probe beam” into the crystal, the team turned off both lasers.

The original optical properties of the crystal that made it opaque were restored, and the probe beam’s light was trapped. When they turned the control beam back on a minute later, the probe beam streamed back out the crystal. The previous record for stopping light, announced in March, was just 16 seconds; the Darmstadt team beat it by using a solid crystal (rather than a gas) and applying a magnetic field.

Next, the team encoded a simple pattern of three stripes in the probe beam to show that image information could be stored and retrieved. Storing information — and storing light for longer intervals — will be essential for the advancement of quantum computing, which could process light-stored data far more efficiently than current conventional computers.

[This article originally appeared in print as "Trapping the Light Fantastic."]