Transformer Drones Are Getting Real 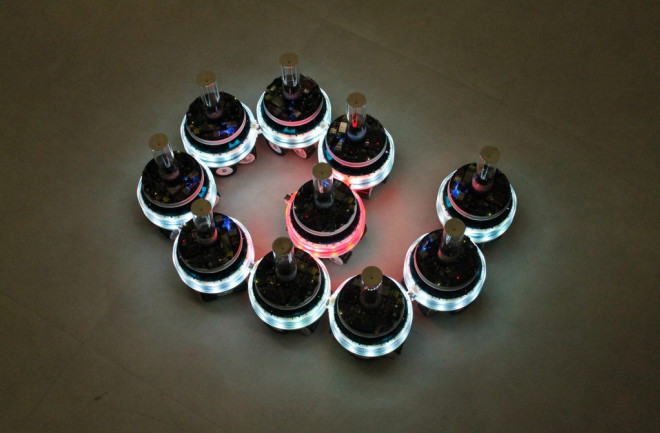 (Credit: Marco Dorigo and Nithin Mathews) In the future, we may have drones that can autonomously change size, shape and function. Basically, Transformers is starting to get real. Currently, most autonomous robots are stuck with the function and form they were designed for, but scientists are working hard to change that. In a study published Tuesday in Nature Communications, a team led by Nithin Mathews of the Universite Libre de Bruxelles in Belgium showcased its fleet of "mergeable nervous system" (MNS) robots. Basically, their gang of bots not much larger than tennis balls are connected to a central decision-making robot (called the brain), and they can merge and morph it different formations to serve any number of functions.

The 10 robots used in the study are fully autonomous and have a circular frame, tracks and wheels. Sensors and LED lights line the frame. “We have developed robotic units that can autonomously form physical connections with each other. Previously, however, each unit was always an independent robot,” researchers write in the study. To form physical connections, each unit has what’s called an inter-robot connection module. This is an “active gripping device with three fingers and a passive docking ring.” One robot inserts its three fingers into another bot’s docking ring and, voila, they’re connected. After doing a little robot shuffle and inserting fingers into places we shouldn’t speak of, the units form an MNS robot. If the robots are told to form a circle, they can form a circle. If they are told to form a "V", they can form a "V". But who decides who’s in charge? Like the saying, “anyone can be president,” well, any robot can be the brain. When an MNS robot splits, each individual unit is equipped with the knowledge to quickly become the brain unit of another MNS robot. https://www.youtube.com/embed/7N6pfOFgwEc The brain unit tells its little children whether or not a command applies to them, that way each robot can focus on its job. No need to clutter the children with data that doesn’t matter.

Do the Robot Shuffle

If these modular drones aren't cool enough already, researchers demonstrated that they could, in essence, heal themselves. Don’t believe me? Watch the below video, which shows an MNS robot recovering from a fault in its brain and then its body unit. https://www.youtube.com/embed/lCPFif63SLI Both children and brain units send periodic signals that act like heartbeats. If one unit’s missing that signal, the missing heartbeat alerts the other units that something is wrong so they can act to fix it. These researchers hope robots will no longer be designed for one specific task, but rather have the ability to adapt to whatever task is thrown their way. Honestly, wouldn’t having your own personal transformer drone be awesome? Oh, the possibilities. Let’s hope these devices evolve faster than humans. “Understanding which morphology is appropriate to which task and environment is a problem nature solves over millions of years using evolution. To solve the same problem on the fly, we might be able to rely on ever increasing computing power and advances in evolutionary computation techniques,” according to the study.