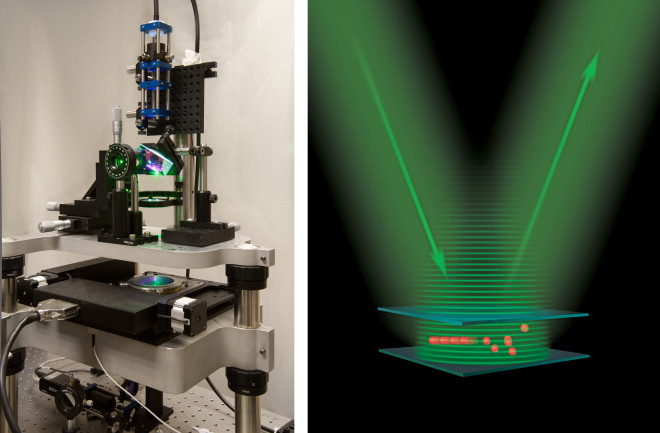 It’s not as sexy as the Death Star, but this lens-and-laser setup (left) allowed scientists to pull particles with light for the first time. The team bounced a beam off a mirror (right) to manipulate tiny Styrofoam bits. | Institute of Scientific Instruments of the ASCR

“It was like sci-fi really happening inside my own lab,” said physicist Tomas Čižmár, describing the first tractor beam to pull an object with light, Star Wars-style.

Normally, photons push matter away from a light source — picture the sun’s rays pushing away a comet’s tail. But Čižmár and colleagues at the Czech Institute of Scientific Instruments reported in January that they had figured out how to pull microscopic Styrofoam particles with light.

They directed a laser beam through a lens and onto a mirror, which reflected back a second beam. The opposing beams canceled out one another, creating a light field with uniform intensity that allowed the field’s photons to pass through the Styrofoam particles instead of bouncing off their surface. As a result, the tiny Styrofoam particles recoiled toward the light source.

Moving the nanoparticles in the study required a couple of watts of optical power — the equivalent of thousands of heat-producing laser pointers — which means a tractor beam big enough to lasso a spaceship is still (light)years away.

[This article originally appeared in print as "Tractor Beam: Activated!"]