After one too many all-night study sessions, a sleep-addled student in Brown University's Technology House looked up at the science library and saw it as a giant Tetris board. Instead of recoiling from that hallucination, he and his dormmates embraced it: With a lot of engineering work, they transformed the glass-and-concrete building into the largest Tetris game in the Western hemisphere. (An even larger one ran at Delft University of Technology in the Netherlands in 1995.) "Somebody wrote a Pong game to run on the building," says Soren Spies, a recent electrical engineering and computer science graduate who was TechHouse's projects manager, "but everyone likes Tetris." A string of 100 Christmas lights illuminated each block of the puzzle pieces, separate control boards switched the lights on and off along each floor of the library, and one modified PC controlled the whole 10-story-tall system. Several hundred people got to play, including Apple cofounder and Tetris whiz Steve Wozniak, who flew out for the event. So what's next? "I know a couple of people are really excited about building a waterfall and fish pond," says Spies. 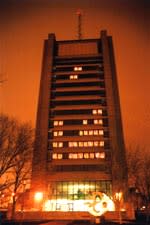