Computer from a Spray Can

What if you could throw some soot into the oven and watch it assemble itself into a computer chip? That's pretty much what nanoscientist Jim Gimzewski of the University of California at Los Angeles has in mind. He and his colleagues found a way to make carbon and nickel atoms spontaneously organize themselves into long, cylindrical molecules that could eventually form the basis of a small, fast— and maybe dirt cheap— computer processor. 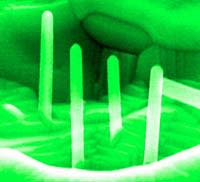 One-micrometer-high pillars of bundled carbon nanotubes could be used to build circuits.Courtesy of Jim Gimzewski/UCLA

Gimzewski's raw materials are nickel wire and buckyballs, soccer-ball-shaped carbon molecules. He alternately evaporates the two materials through an array of tiny holes to build up a series of layered stacks on a surface. Next he heats those stacks to 1,600 degrees Fahrenheit for a few minutes in the presence of a magnetic field. Nickel atoms crack open the buckyballs, several thousand of which join to form a flawless tube. Hundreds of thousands of these tubes, in turn, grow in orderly formation, like tightly bundled straws. "We didn't believe it at first. I've never seen anything so perfect in my life," Gimzewski says.

Depending on their construction, such carbon nanotubes can conduct electricity like copper or control the flow of electrons like silicon, making them perfect for electronics [see Future Tech by Ivan Amato in our February issue]. Past attempts to manufacture them, however, have produced a jumble of flawed tubes. Someday, Gimzewski thinks he could keep spraying material through the pores while changing the magnetic field so the tubes would assemble themselves into a steady flow of microcircuits. "If I could achieve that, people would go crazy," he says. — Fenella Saunders

Computer Screen with a Twist

The long-sought "paperless office" remains a fantasy, in part because it strains the eyes to read long texts on a computer screen. But physical chemist John Rogers and his colleagues at Lucent Technologies' Bell Laboratories in New Jersey and E-Ink Corporation in Massachusetts are developing a lightweight, flexible computer display that will be able to be held, folded, and read like a newspaper. 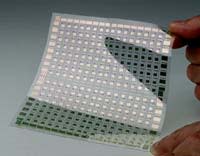 A new printing technique churns out flexible sheets of electronics. They could make "electronic paper" practical.Courtesy of Bell Labs/Lucent Technologies

Now Rogers and his team have invented a printing process that can build such displays cheaply and quickly. The researchers created a silicone rubber stamp to print a pattern of wires onto a sheet of gold-coated Mylar. After some further preparation, they apply a layer of liquid semiconductor, using a technique similar to the one used to create silk-screen T-shirts, to complete the circuitry. Finally the electronics are laminated to a plastic sheet made of tiny capsules containing white pigment particles in a dark fluid. Under a burst of electric current, the particles flow to the front of the capsules, creating text. The technique lends itself to mass production. "You could print out the displays in continuous fashion, the way you would print a newspaper or magazine," Rogers says. — Fenella Saunders

No More Tap, Tap, Tapping Away at the Old Computer

A flat touch pad called the FingerBoard could someday make conventional keyboards look as quaint as manual typewriters. To tap out a word, lightly touch a series of letters on the FingerBoard's flat surface. To perform a click of the mouse, slide two fingers together anywhere on the surface of the board; to zoom in on an image, splay your fingers. Designed by electrical engineers Wayne Westerman and John Elias of the University of Delaware, the FingerBoard detects distortions in the electrostatic field near the surface of the board and uses that data to determine the commands. Preliminary tests indicate the FingerBoard is easier on the hands than other keyboards, because it requires virtually no force to touch keys and no awkward movements to reach for a mouse. The device goes on sale this month ($289, www.fingerworks.com). — Josie Glausiusz