To See the Brain Better, Cut Away Some of That Pesky Skull 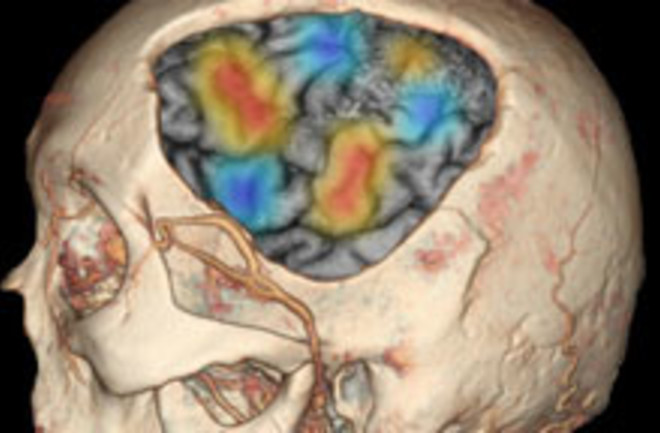 What do your cell-phone and a brain scan have in common? Both need clear signals for optimal efficacy. Doctors often have to work with sketchy data when it comes to brain scans--but the solution to that problem isn't one that many patients will clamor to try. A new study to be published in a forthcoming issue of the Journal of Cognitive Neuroscience says the best way to get clearer EEG brain scans is to remove a part of the skull. For years, doctors have been treating patients who have suffered severe head trauma like a gunshot or knife wound by cutting out a chunk of the skull--a procedure called a hemicraniectomy. This gives the brain room to swell, and when the wound heals they re-attach the chunk of skull. Neuroscientist Bradley Voytek of the University of California at Berkeley, the lead author of this study, worked with hemicraniectomy patients and utilized this window to see how the skull acts as a barrier to EEG's--a brain scan that is done to assess the brain's electrical activity. Wired reports that the patients were instructed to peform simple tasks:

During these tasks the team measured a patient’s brain waves on both sides of his head. On one side, just a thin flap of skin separated the brain from the EEG electrode, while on the other side the skull was intact. Signals from the skull-free side were, unsurprisingly, much stronger, less noisy and easier to pinpoint to a specific task and region of the brain.

The study not only offers a creepy way to get clearer brain scans, it also suggests another way to situate neural implants, like the kind that may one day be used by paralyzed people to relay their brain signals to prosthetic limbs. Researchers note that it's difficult to maintain a long-term electrode in the brain, but some delicate brain signals aren't strong enough to be read from outside the skull. By drilling a small hole into the skull and placing the electrode on the outermost surface of the brain, the researchers think they might obtain better brain signals. Related Content: 80beats: Researcher Updates His Twitter Feed Using Only Brainwaves 80beats: Study: Brain Scans Diagnose PTSD with 90 Percent Accuracy 80beats: Electrodes Stuck in the Brain Show How Thought Becomes Speech 80beats: Play Tetris, Get a More Efficient & Thicker Brain DISCOVER: Brains Don't LieImage: Bradley Voytek