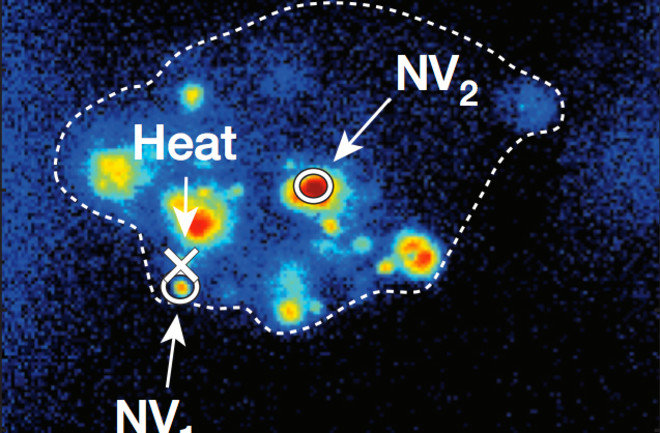 Nanodiamonds (represented here by circles) are used to measure the temperature changes inside a single living cell as it is heated. Image credit: Nature.

How can you tell if an amoeba's running a fever? No it's not the setup of a cheesy joke---it's a legitimate scientific problem. How do you measure the temperature of things so small you can't stick a thermometer in them? Researchers have come up with a solution, creating the first-ever thermometer capable of measuring the temperature within a single cell. The thermometer doesn't look much like the glass rod the school nurse shoved under your tongue. Instead, it is a tiny diamond that measures just 0.1 micrometer across. Researchers at Harvard and in Hong Kong inserted this itty bitty crystal inside a human embryonic fibroblast cell and successfully took its temperature.

The technology behind the new ultra-tiny thermometer takes advantage of the natural structure of diamond. If you zoom in on a diamond, it's made up of a lattice of carbon atoms. Every once in a while an impurity sneaks in and replaces two carbon atoms in this lattice with one nitrogen atom and one empty spot. Scientists call these defects nitrogen vacancies (NV). The spinning electrons within these NV impurities have two energy levels: 0 and 1. The energy difference between these two levels varies with temperature, as the diamond's lattice structure expands or contracts. To measure temperature with the diamond, then, researchers directed microwaves at a living human cell under a microscope. By measuring how much energy was required to bump an electron to a higher energy level, researchers could infer the lattice structure of the diamond, and thus the temperature of the cell it was within.

It's getting hot in here

Scientists put a nanodiamond thermometer inside a living cell to measure its temperature. Image credit: Nature. The nanodiamond thermometer measures changes in temperature, not temperature itself, but it does this with an accuracy down to 1.8 millikelvins (thousandths of a degree Celsius). And though nanothermometers already exist, none has been able to measure temperature changes inside living cells. Unfortunately, this microwave-based method causes overheating in the cells, which means that while it works in living cells on a microscope slide, it won't work in actual living beings. But the researchers are working on methods that would allow temperature to be read without destroying the cell. So far they have a few ideas which they discuss in their study published in Nature yesterday. Since temperature differences drive many biochemical reactions both within the cell and outside it, precise temperature measurements have some important implications. Researchers have previously demonstrated how to heat up a cell, so by combining that technology with a nanothermometer, researchers may eventually be able to manipulate immune responses, control temperature-induced gene expression and treat disease only in the specific cells where they occur.