Throwable Robot Can Climb Aboard Ships, Spy on Pirates 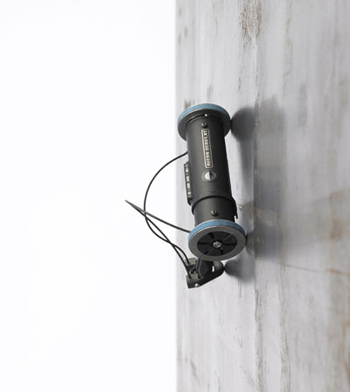 ReconRobotics has unveiled a reconaissance microbot that can provide anti-piracy forces with valuable surveillance information. Yep, that's right: There are now tiny robots that board pirate ships. Pirate-fighting forces often have to board a ship with incomplete information, not knowing exactly what's going on below decks, how many pirates are on board, or how the ship's crew is faring---putting them at a dangerous disadvantage. To help these forces take stock of the situation before going in, ReconRobotics is making a seafaring version of its ReconScout Throwbot, a one-pound remote-controlled robot that can be tossed into a building and zip around taking video surveillance, sending the feed back to its controller. This new bot has magnetic wheels that let it drive straight up a vertical metal wall---meaning that if anti-piracy forces toss the robot onto a ship's hull, it can climb on board and send back valuable video recon. The Throwbot can take useful video even in it's pitch black below decks, using infrared illuminators. ReconRobotics is also developing a marsupial robot deployment system, which is exactly what it sounds like: a big robot that carries around the recon robots, then shoots them out with high precision when the time comes. U.S. forces in Iraq and Afghanistan have already been using an earlier version of the ReconScout Throwbot for a few years. It can't roll up metal walls, but at eight inches long and weighing 1.2 pounds, it's still an agile little spybot that can survive throws of 120 feet, meaning troops can throw it onto a roof, toss it down a flight of stairs, or "even drop it from an unmanned aerial reconnaissance vehicle." Those bots have recently been approved for use by police and firemen here in the US. Here's the little guy in action, scaling a sheet of metal like a champ. Pirates, prepare to have ye timbers shivered: Image and Video: ReconRobotics