This Paint Actively Cools Things Down 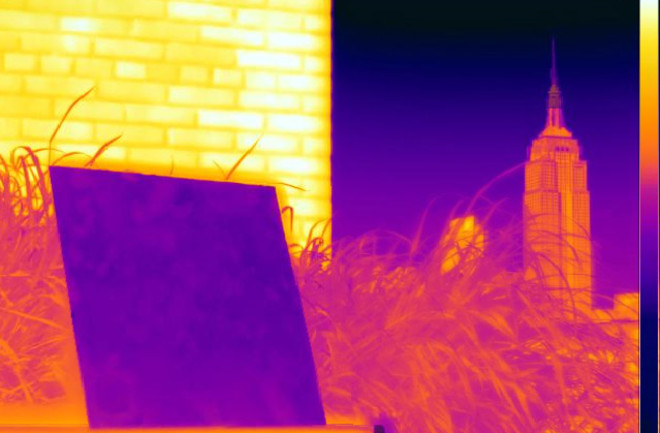 This paint reflects sunlight and emits heat, making it much cooler than common building materials - or even ambient air. (Credit: Jyotirmoy Mandal) As artists and toddlers have long known, paints can provide lots of entertainment. But, not every part of the process is fun: Watching paint dry is synonymous with boredom, like watching the grass grow. It’s almost too bad, because there’s where the magic happens. The (usually) liquid paint drying, and becoming solid, is what gives the art (or school project, or bedroom wall) its longevity, its permanence. You can erase pencil and even some inks, but dried paint is there to stay. That phase transition between liquid to solid is also responsible for a new development in the world of paints — one that can reduce pollution, improve living conditions around the world and even save money. A paper appearing today in Science details the promise and process of a new kind of coating, one that reflects so much light it actually cools below ambient temperatures. And the key is all in how it dries.

To create the new material, the scientists turned to polymers, long chains of repeated molecules. (This page actually is a great primer on the subject, despite apparently being aimed at 3rd graders.) Their process: Mix together a batch of a certain polymer with acetone and water, spread it atop almost any substance and just let it dry. Twice. First the acetone evaporates, and then the water. What remains is a dull, white coating — with amazing properties. The authors gave it the reader-unfriendly name of poly(vinylidene fluoride-co-hexafluoropropene), or just P(VdF-HFP)HP for short. That dual evaporation process creates “air voids,” tiny air bubbles throughout the dried coating that are great at scattering and reflecting light. (The researchers compare them to the air gaps between snowflakes that help make fresh snow among the most reflective materials on Earth.) Like conventional white paints, this stuff reflects sunlight, but it does it exceedingly well, bouncing back 96 percent of the sun’s light. Normal paints, based on pigments rather than P(VdF-HFP)HP’s voids, do a decent job of reflecting visible light, but they actually absorb a lot of the sun’s ultraviolet radiation, making them less efficient overall.

Here’s the best part, though. P(VdF-HFP)HP also manages to emit away any heat it does manage to absorb in the form of infrared light. Because our atmosphere is “invisible” to infrared, meaning there’s nothing in the way that absorbs that kind of light, it can escape from ground level directly to the icy coldness of space. So this new coating actually produces a net loss of heat, actively cooling whatever it coats by around 11 degrees Fahrenheit. The study’s authors calculate that’s an average cooling power of 96 Watts per square meter — with no electricity, or even moving parts! Just adding an easily made, easily applied coating (it can be painted, dip-coated or sprayed on). The stuff also works on lots of surfaces including plastics, metal and wood. And it’s apparently super durable, not losing its cooling properties even after outdoor testing and “accelerated aging.” The researchers even added dyes to the mix and saw that P(VdF-HFP)HP still works well even with colors, important since we know no one will want to use the stuff if it looks ugly. (No word yet on how effective a weight loss aid it is, but honestly at this point I wouldn't be surprised.)

Improved cooling technologies are essential for a warming globe, particularly one where so many people live in heat islands, or just generally hot places. As the authors write, the “compression-based cooling systems that are prevalently used (e.g., air conditioners) consume significant amount of energy, have a net heating effect, require ready access to electricity, and often require coolants that are ozone-depleting or have a strong greenhouse effect.” They came up with a cheap, eco-friendly alternative that works well as a paint-like coating or even as recyclable sheets. Assuming it all holds up: Way to go team! There’s even a little bonus: The technique they used is full of promise, too. Similar production methods could produce similarly cooling materials with glossier coatings and capable of withstanding extreme temperatures (above 400° F). All that just from figuring out, basically, a better way for paint to dry.