This Could Be the First 1,000 mph Land Vehicle 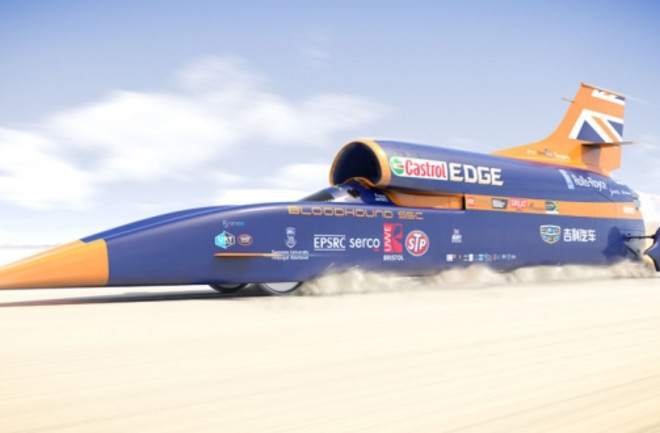 The Bloodhound test vehicle. (Credit: The Bloodhound Project) A slim blue needle raced down a runway in southwest England Thursday. Called the Bloodhound, the vehicle reached speeds of only around 200 miles per hour, but the team behind it has their sights set much higher. They hope to be the first to notch the 1,000 mph land speed record, a speed that today is only achievable in the skies. The demonstration was the Bloodhound's first public outing, and served as both a PR opportunity and a chance to get preliminary data on the vehicle's performance. Thursday's run utilized a single Eurojet EJ200 jet engine, and engineers plan to use rockets for the final test runs. The demonstration Thursday was a simple preliminary test of the car, giving the engineers the confidence to proceed with higher-speed tests on a South African lake bed next year. https://youtu.be/FurX-CjOZ6Y?t=59m50s In the pilot seat was Andy Green, a former fighter pilot in the Royal Air Force, and current land speed record holder. Green, along with many Bloodhound Project team members, achieved a speed of 760 mph in 1997 with a turbofan-powered vehicle, the ThrustSSC, in Nevada. It remains the only land vehicle to have broken the sound barrier. They're hoping to one-up themselves this time, with a rocket engine from Norwegian aerospace firm Nammo. That rocket won't be ready for another two or three years, however, and the team plans to keep busy with ever more speedy tests in the meantime. In the initial run today, the Bloodhound hit 200 mph in around nine seconds. That's well within the range of current production cars, but they plan to take the vehicle up to 650 mph with their current set-up, according to the BBC. Tests at those speeds will give more critical feedback about the design, including how the wheels perform. At around 400 mph, they can no longer spin as fast at the car is moving; instead, they function more like sled runners. We'll have to wait until 2019 for the first record-breaking attempt. The Bloodhound team wants to first hit 800 mph to establish a new land speed record and then try for the 1,000 mph milestone. At the helm will be Green, vying to surmount his previous record and become the first human to reach quadruple digits on land.