The 'Uber of Drone Delivery' Flies a Domino's Pizza 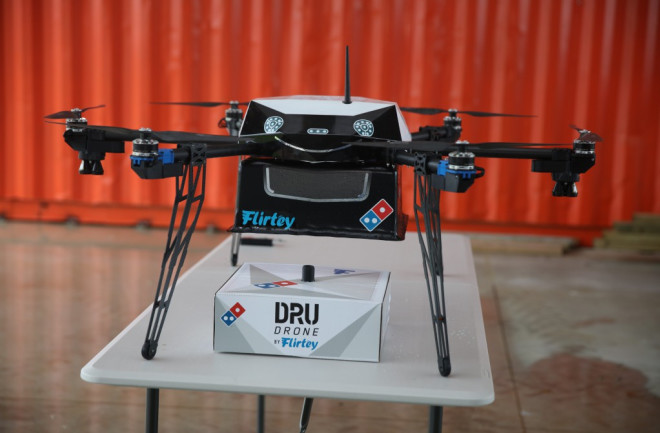 The drone delivery startup Flirtey conducted a flight test for Domino's Pizza on Aug. 25, 2016. Credit: Flirtey Domino's pizza deliveries may literally fly to your door in the coming years. The pizza giant partnered with a drone delivery startup on a pizza delivery flight test that could pave the way for commercial drone pizza deliveries in New Zealand before the end of the year. If the futuristic scheme takes flight, it could help change the way that people order delivery from huge chain stores such as Domino's and 7-Eleven. The startup at the heart of the plan is Flirtey, a Nevada-based company racing against tech giants such as Amazon and Google to get drone delivery services off the ground. Flirtey envisions a future where anyone can use a smartphone app to order time-sensitive food or medicine delivered to their doorstep or backyard by drone. Such capability could help lower delivery costs for companies such as Domino's and transform customer expectations of swift deliveries involving piping hot pizzas. "We see ourselves as being the Uber of drone delivery," says Matt Sweeney, CEO of Flirtey. The startup's drones can carry items weighing up to five and a half pounds on round trip journeys of up to 10 miles. To avoid hitting trees or power lines, the drones hover about 40 to 50 feet off the ground and lower their deliveries by cable to the waiting customer below. The cable lowering method also keeps customers at a safe distance from the drone's whirling rotors. A First Flight for Drone Pizza Delivery Flirtey's first flight test involving Domino's pizza took place at an airport in Auckland, New Zealand. The Flirtey drone took off with its precious pizza payload, flew about a mile and then lowered the pizza by cable to a location next to an airport terminal. Sweeney was especially pleased that the Domino's pizza delivery test went off without a hitch despite some rainy weather. "Now that we’ve done this successfully in a test environment, the next step is doing it commercially within the next couple months," Sweeney explains. "If I’m right and we do it in the next couple months or before the end of the year, that puts us way ahead of anyone else." Drone pizza deliveries have been tried occasionally a few times before, but more as one-off stunts rather than legal commercial services. On May 11, 2014, Francesco's Pizzeria used a drone to deliver a pizza to a friend of the restaurant CEO on an apartment rooftop in Mumbai, India. A Russian pizza chain called Dodo Pizza conducted six drone pizza deliveries on June 21, 2014, but were later fined by Russian authorities for the illegal flights. By comparison, Sweeney and Flirtey want to do drone pizza delivery the legal way. They conducted the latest flight test on behalf of Domino's as part of a final regulatory approval process in New Zealand. If all goes well, a select Domino's store in New Zealand will begin offering pizza delivery by drone before the end of 2016. Getting a Head Start on Amazon and Google Domino's partnership with Flirtey could signal one of the biggest expansions yet for drone delivery services. The current commercial agreement means that Domino's will pay Flirtey to provide the pizza drone delivery service from its select store. A successful commercial trial run could translate into big business for Flirtey, especially if Domino's chooses to expand the service to more stores in New Zealand and potentially worldwide. But commercial drone delivery services still face big regulatory challenges before they can take off internationally. Part of the reason Flirtey chose to test drone pizza delivery in New Zealand is that the country has a relatively streamlined regulatory approval process compared with many other countries. Sweeney described New Zealand's process as a "risk-based regulatory framework" that welcomes drone company proposals as long as they can prove the safety of their schemes. A foothold in New Zealand drone pizza delivery may also provide an edge for Flirtey in competing with tech titans such as Amazon and Google. Flirtey expects to have a head start on its bigger rivals by gaining operational flight experience with commercial drone delivery services in New Zealand. It's not far from the startup's humble origins in Sydney, Australia as a partner for a textbook publisher. Food Takes Flight in the USA Flirtey has also been actively conducting U.S. drone delivery tests under the approving eyes of the Federal Aviation Administration (FAA). Last year, the startup made the first FAA-approved delivery of medical packages to a rural health clinic in Virginia. In June 2016, Flirtey showed how its drones could carry medical supplies from offshore ships to a simulated medical camp in New Jersey. Serious testing for pizza delivery by drone has not expanded to the U.S. just yet. But on July 22, 2016, Flirtey demonstrated a fully autonomous drone delivery without any direct human control by delivering Slurpee drinks, a chicken sandwich, donuts, hot coffee and candy from a 7-Eleven store to a customer's home. Similar to the Domino's partnership, Flirtey has signed a commercial agreement with 7-Eleven, the world's largest convenience retailer with almost 60,000 stores worldwide. The startup plans to gradually increase its drone delivery flight operation from the select 7-Eleven store in Reno, Nevada, which is conveniently located within one of the FAA's six designated test sites. The FAA's first rules making commercial drone flights legal take effect starting on August 29, but they contain certain limitations such as requiring drones to always fly within a pilot's visible line of sight. Still, Sweeney points out that Flirtey drones could still reach about 1,500 homes within a mile radius of the 7-Eleven store chosen for testing. "That’s a pretty large market for us initially, even within the constraints of the rule," Sweeney says.