Microsoft researchers in Beijing are trying to best Google maps by culling knowledge from a mythical beast known as the taxi driver. The Microsoft folks are trying to improve their online maps using the cabbies' deep knowledge of Beijing. The problem with typical maps and the directions they offer is that the shortest route isn't always the fastest route. In big cities, cabbies know which side streets offer shortcuts, and what areas of the city to avoid at which times. The researchers are trying to rake that data out of the cabbies' habits by analyzing the GPS data from over 33,000 taxis in Beijing. The group at Microsoft Research Asia, led by Yu Zheng, developed an approach (called T-drive) to analyze and merge this cabbie data with satellite maps to improve the mapping experience and offer faster directions--even if the driver doesn't engage in the lane swerving, honking, and pedestrian slaloming that give cabbies an edge. 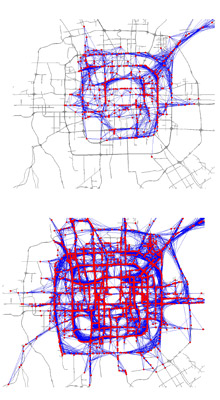 According to the Microsoft researchers, the routes suggested by T-Drive are faster than 60 percent of the routes suggested by Google and Bing maps (which provide essentially the same driving time estimates as each other). Overall, T-Drive can shave about 16 percent off the time of a trip, the researchers say, which translates into about 5 minutes for every 30 minutes of driving.

This approach could work just as well in other dense, cabbie-infested cities. The team is also working on projects that will incorporate real-time accident and traffic data into these "smart" maps. Technology Review

allows you to share tips with your social network. Related content: Discoblog: Google Street View Goes to Antarctica, Brings Maps to the Penguins