The Science Behind the Shoot-Out (or, Why Good Guys Can't Win) 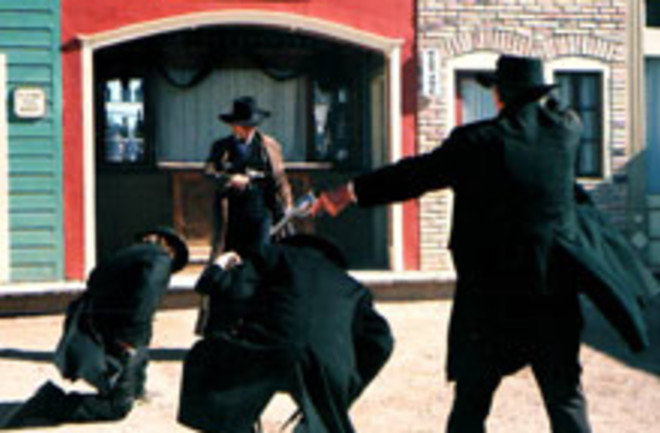 Picture the classic shoot-out in a Western movie: The good guy and the bad guy face each other, their hands quivering over their gun holsters. The bad guy reaches for his weapon, causing the good guy to react--he whips out his pistol and BAM! The hero triumphs. Physicist Niels Bohr once had a theory on why the good guy always won shoot-outs in Hollywood westerns.

It was simple: the bad guy always drew first. That left the good guy to react unthinkingly – and therefore faster. When Bohr tested his hypothesis with toy pistols and colleagues who drew first, he always won [New Scientist].

But new research suggests that Bohr didn't have it exactly right. In a study published in Proceedings of the Royal Society B, scientists suggest that people do move faster when they are reacting to what is happening around them--but not fast enough for a heroic gunslinger to save his own life. Researchers set up an experimental (and bullet-less) duel to study two types of movement, and found that "unplanned actions" were faster than "planned actions."

Pairs of participants were put in a button-pressing competition with each other.... "There was no 'go' signal," said Dr Andrew Welchman from the University of Birmingham, who led the research. "All they had to go by was either their own intention to move or a reaction to their opponent - just like in the gunslingers legend"

Welchman found that the subjects who started the sequence of button-pressing first didn't move as quickly as their partners who were reacting to the action. Those reactive participants pressed their buttons 21 milliseconds faster. Welchman observed:

"If you're making a cup of tea that would be an intentional decision. If we then knock the cup of tea off the table, the reactive comes into play as we try to catch the cup as fast as possible" [BBC].

But the button-pressing duel also revealed that the reactive party was critically delayed. A "reaction time" of 200 milliseconds elapsed between the moment the first player hit a button and when the second player began to move, which meant that the reactive player never won the duel. Welchman notes that the same reaction time would slow down a cowboy, so in a gunfight, the 21 millisecond reactionary advantage would be unlikely to save you

The researchers plan to investigate whether there are two different brain processes for "planned actions" and "reactive actions." They hope future findings will help patients suffering from Parkinson's disease, who have greater trouble with intentional movements like picking up a ball on the table, as opposed to catching it when thrown at them.

This might be evidence that particular areas of the brain affected by Parkinson's contribute more to intentional actions than reactive ones. If this turns out to be the case, then it may also be possible to develop some strategies to ease movement in such patients [University of Birmingham].