The Komodo Dead: What Really Kills in The Walking Dead 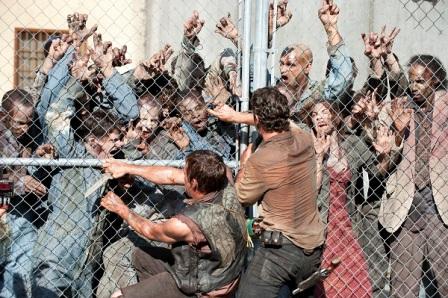 You don’t need a gun. You don’t need a knife or a machete or an axe. If you find yourself in a post-apocalyptic world filled with shambling swallowers of human flesh, what you really need is good hygiene. The resurgence of zombies into pop culture has tickled our morbid curiosity, but has also sparked many nerdy debates about viruses and disease. Arguably the most popular zombie narrative today, The Walking Dead takes place in the wake of an airborne virus or pathogen that has enabled the dead to walk among the living. The show doesn’t dabble in the supernatural, so many have taken the opportunity to explore zombies literally, that is to say, the science behind the gruesome pandemic. [Note: Mild SPOILERS for the show are below.] A fan of the show myself, I wanted to figure out how you exactly become a zombie. Is it the bite? Is it death? What I found suggests that most viewers are likely mistaken about how zombification in The Walking Dead works. It turns out that becoming a zombie is fairly straightforward. According to a quote from the creator of the original comic series, Robert Kirkman:

The rule is: WHATEVER it is that causes the zombies, is something everyone already has. If you stub your toe, get an infection and die, you turn into a zombie, UNLESS your brain is damaged. If someone shoots you in the head and you die, you're dead. A zombie bite kills you because of infection, or blood loss, not because of the zombie "virus."

The Walking Dead (TWD) then substitutes the conventional zombie trope of “you get bit, you turn,” with, “you die, you turn.” Unlike getting bitten by another fictional creature like a vampire or a werewolf, the gnawing teeth of the walkers in TWD don’t carry an infecting “zombie virus.” If we go by the rules of the creator, true zombification follows another route. This of course brings us to Komodo Dragons. Do You Know Where That Mouth Has Been?! At the end of season one of TWD, protagonist Rick Grimes discovers that everyone carries a virus which “reboots the brain” upon death, resulting in a ghastly transformation. But if it is merely death that turns you, why do all of the characters regard a zombie bite as a death sentence? Why is it one of the first questions they ask strangers, and why did Herschel need to lose a leg? There is a way to square this with Kirkman’s quote, and more interestingly, with science. Dead bodies can be dangerous in and of themselves, so humans have always taken precaution with them. In fact, in a case where we have to handle corpses, such as after a natural disaster, there are a number of steps responders have to take to avoid infection and disease. For example, a rotting body can still transfer gastrointestinal pathogens, tuberculosis, and hepatitis [PDF] to the living. So, one can imagine that a biting mouth of a rotting corpse, continuously chomping down on humans, isn’t the most hygienic place. A diseased body is bad enough, but it doesn’t fully explain the extreme aversion to being bit by a zombie. Beyond the disorders and detritus that come along with death, perhaps the walkers in TWD employ the same deadly cocktail of disease that Komodo Dragons do. 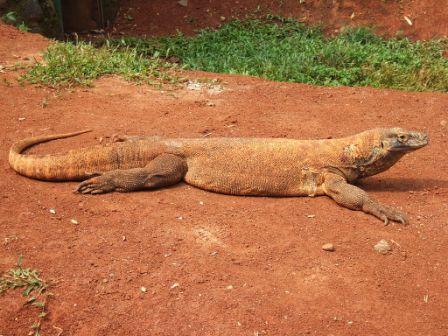 The largest lizards in the world, Komodo Dragons are fierce predators. They can weigh-in much heavier than the average human, and can eat 80% of their body weight in 20 minutes. Multiplying the danger, Scientists have recently discovered that the dragons also have a venomous bite; a scary addition to an already formidable foe. UPDATE: Based on the most recent science, it turns out that the "dirty mouth" of the Komodo dragon is a myth. Although, Komodos could possibly have dirty bites based on the stagnant water that they drink. The mouth of a flesh-hungry corpse, harboring the diseases that can accompany death, is definitely something to avoid. A bite of this kind would be nearly impossible to treat the in the resource-strapped world of TWD. Not even Herschel’s handful of scavenged antibiotics and veterinary skill could save you from a serious blood infection. A “Komodo Dead” approach to explaining zombification not only has scientific support, it’s supported by the show. Whether TWD is written so that the characters know this information, they know enough to realize that they can’t treat a bite (or even a scratch) from a walker. Trying to mend a diseased bite is hopeless in a world without working hospitals. This explains why T-Dog or Rick can survive a stabbing but not a walker bite. Rudimentary first aid might be able to handle a gunshot wound, but not tuberculosis. Though the show routinely portrays the aftermath of a zombie bite as a terrible, unknown kind of fever, this too is consistent with a Komodo-style bite. There is no reason to believe that anyone without medical training would recognize the symptoms of a serious systemic infection. The Walking Dead then cleverly plays with the audience’s conceptions of how zombification works: even the characters assume that there is something special to a zombie bite, when in reality they are simply misidentifying a blend of bacteria. A scientific understanding of a zombie bite still makes it rational to fear (and possibly mercy-kill) a bitten survivor. An untreatable infection brings on the transformation quicker, and the only way to stop that is with a bludgeon to the brain. Without medical training and supplies, you should avoid the mouth of a walker like, well, grim death. Who Would You Believe In An Apocalypse? There are problems with this twist in zombie canon. Like most other zombie tales, nearly everything in TWD suggests that a zombie bite is what changes you, as though it carries a zombifiying virus itself. Everyone in the show treats a zombie bite as a special case of bodily harm. “Have you been bit?!” is a conversation starter. Furthermore, the “Komodo Dead” is inconsistent with certain episodes. When the Center for Disease Control (CDC) enters the show, we see medical tests being performed on “turning” subjects. You would think that the CDC could figure out that these poor souls were dying from dysentery or hepatitis or a gastrointestinal pathogen, and not some “unknown” malady. Lastly, if diseased bodies and mouths are really the problem here, Rick and the rest of the group don’t seem to be too concerned with getting entirely covered in human entrails and blood. There is an episode or two where we see an aversion to the guts of walkers, but it is generally inconsistent. So we have a classic fanboy dilemma: do we trust what the audience sees and what is implied on the show, or do we re-interpret what the audience sees through the creator’s own words? Personally, I prefer the Komodo-style interpretation, as it has some basis in reality, agrees with the creator, and is a clever twist on the often-trite zombie narrative. All that being said, I’d much rather take on a herd of walkers than a pack of Komodo Dragons. Images: Screenshot from The Walking Dead (used for educational purposes); Komodo dragon, Varanus komodoensis, by Midori