The Internet Pulses With the Rhythms of Human Life

Neuroskeptic is a neuroscientist who takes a skeptical look at his own field and beyond at the Neuroskeptic blog.

Life is dominated by the Earth’s cycles. Day and night, spring and autumn, change the environment in so many ways that almost all organisms regulate their activity to keep up with time and the seasons. Animals sleep, and many hibernate, moult, and breed only at certain times of the year. Plants time the growth of seeds, leaves, fruit and shoots to make the most of the weather. But what about humans? We sleep, and women menstruate, but do other biological cycles affect our behavior? The Internet has offered researchers a unique resource for answering this question. For example, according to research published recently in the Archives of Sexual Behavior from American researchers Patrick and Charlotte Markey, Americans are most likely to search for sex online during the early summer and the winter. The authors looked at the Google Trends for a selection of naughty words and phrases, and this revealed a pretty marked 6 month cycle for searches originating from the USA, with two yearly peaks in the search volumes. The words were related to three categories: pornography, sex services (e.g. massage parlors), and dating websites.

This image shows the graph for pornography searches---the grey line---with an idealized six-month cycle also shown for comparison, the black line. The data show a strong twice-yearly peak. The picture was similar for two other categories of sexual words: prostitution and dating websites. There was no such pattern for some non-sexual "control" words, ruling out the possibility that people just use the internet more at these times. Markey and Markey say that a six-month sexual cycle has been reported before

: It crops up in everything from abortion rates, to condom sales, and diagnosis of sexually transmitted infections. But why? One possibility is that it's purely a social construction driven by the fact that in Western cultures, Christmas and summer are the main holiday seasons. Others have suggested that college and high-school students, and the timing of school breaks, might be responsible. On the other hand, it could reflect a more primitive biological cycle. Twitter offers an even richer source of information about how online behavior. Last year, Scott Golder and Michael Macy of the Department of Sociology at Cornell University reported on how Twitter's mood changes

over time. By tracking the number of tweets containing positive and negative emotional words and phrases, Golder and Macy showed that, on average, tweeters are happier at the weekends and in the early morning and the evenings: 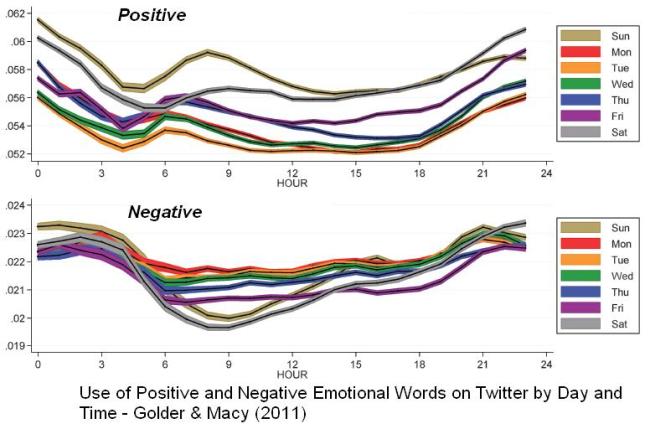 That’s perhaps not all that surprising, and it might just be because most people work 9--5, Mondays to Fridays. But the data revealed more subtle patterns as well. For example, the authors found changes in emotion word use over the course of the year: they found that usage of positive words was correlated with changes in the amount of daylight. As days get longer, people get happier, while shortening days are associated with less positive words. The effect was statistically significant, although the size of the effect was small. This kind of study would have been unthinkable without the help of the internet and modern social media. 10 years ago, such a rich collection of moment-by-moment information just didn’t exist. As part of their study, Golder and Macy created timeu.se

---a free searchable database of over half a billion tweets from early 2010, indexed by date and time. This allows anyone to conduct their own investigations on the daily and weekly cycles of topics on Twitter. Making use of this service, John Cunningham of the University of Toronto recently published a short piece in the journal Epidemiology

about alcoholic drinks. Alcohol-related tweets peak in the evenings, and are especially popular on Fridays and Saturdays. Again, no surprise there, and a closer look 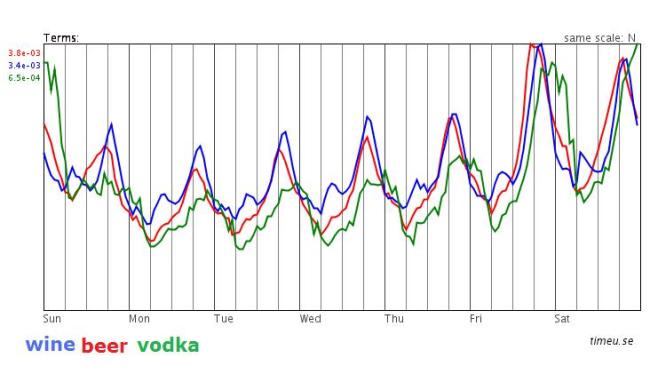 Alcohol Tweets By Day and Time

"Beer" was most popular in the early evening, around 9 pm, while "Wine" peaked slightly later in the day. "Vodka" was clearly different: it didn't max out until about midnight. (People don’t seem to be heeding the popular "beer before liquor, never sicker" rule.) Overall, while the internet offers a great deal of data for researchers, there are important limitations. The internet only tells you what people are talking about---not what they’re actually doing. And there are always questions over whether it’s biology or culture that drives the differences. After all, it’s surely the latter in the case of alcohol; we didn’t evolve to drink beer and vodka, let alone one before the other.