The Flying Car That Could Expedite Your Morning Commute 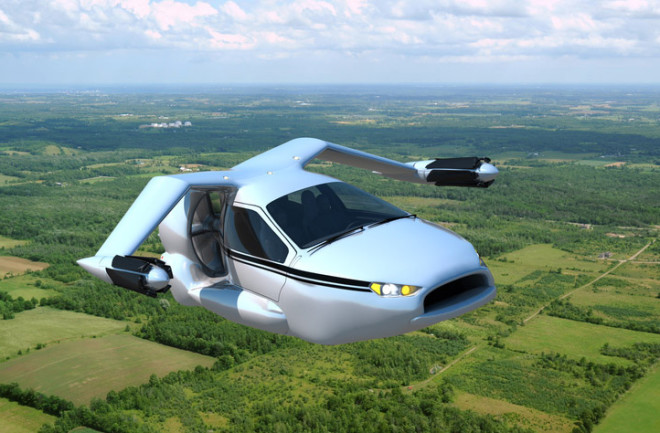 An artist's rendering of the TF-X in flight. Courtesy Terrafugia Flying cars have long been the unofficial signpost that will mark our entrance into The Future. Now, it appears, that key moment could be soon approaching. Flying car prototypes are nothing new. The U.S. Patent Office in 1918 issued Felix Longobardi the first patent for a flying vehicle, which was also submersible in water. Subsequent attempts at the flying car, though they flew, weren’t very practical. However, a team of Massachusetts Institute of Technology alumni is working with a company called Terrafugia to develop a prototype that could make flying to work a reasonable proposition. Fully Loaded The developers are the same MIT alumni that developed the Transition car-plane, which still requires a 1,700-foot runway to take to the skies. To eliminate the need for runways, their new vehicle, dubbed the TF-X, would be capable of vertical takeoff and landing — a crucial maneuver in urban environments. Based on designs, its flight mechanics would be similar to the military’s V-22 Osprey, based on a video released by developers that simulates flight in the TF-X (below). The TF-X is designed to seat four passengers, fit inside a standard single-car garage, travel 500 miles on one trip, and reach speeds of 200 miles per hour, according to specifications listed on the Terrafugia website. It would take just five hours of training for the average car driver to learn how to safely operate the craft. And fortunately for future airborne commuters, the TF-X would feature automatic systems that avoid mid-air collisions, detect bad weather, and automatically implement an emergency auto-land procedure if the driver becomes unresponsive. But the biggest feature to brag about to your friends if you someday get your hands on a TF-X: It’s a hybrid. Development Timeline You’re going to have to wait a while before you get behind the wheel of a TF-X. Development is expected to take roughly 8 to 12 years. If the TF-X finally goes to market, it's estimated to cost about as much as a very high-end luxury vehicle. However, if you can’t wait that long, the Transition flying vehicle, mentioned earlier, is nearly ready for sale. Designers are still working through product development and the federal regulatory process. If you can spare about $280,000, the Transition could be yours.