The Death of "Near Death": Even If Heaven Is Real, You Aren’t Seeing It

You careen headlong into a blinding light. Around you, phantasms of people and pets lost. Clouds billow and sway, giving way to a gilded and golden entrance. You feel the air, thrusted downward by delicate wings. Everything is soothing, comforting, familiar. Heaven. It’s a paradise that some experience during an apparent demise. The surprising consistency of heavenly visions during a “near death experience” (or NDE) indicates for many that an afterlife awaits us. Religious believers interpret these similar yet varying accounts like blind men exploring an elephant—they each feel something different (the tail is a snake and the legs are tree trunks, for example); yet all touch the same underlying reality. Skeptics point to the curious tendency for Heaven to conform to human desires, or for Heaven’s fleeting visage to be so dependent on culture or time period. Heaven, in a theological view, has some kind of entrance. When you die, this entrance is supposed to appear—a Platform 9 ¾ for those running towards the grave. Of course, the purported way to see Heaven without having to take the final run at the platform wall is the NDE. Thrust back into popular consciousness by a surgeon claiming that “Heaven is Real,” the NDE has come under both theological and scientific scrutiny for its supposed ability to preview the great gig in the sky. But getting to see Heaven is hell—you have to die. Or do you? Crossing Over with Alexander Eben 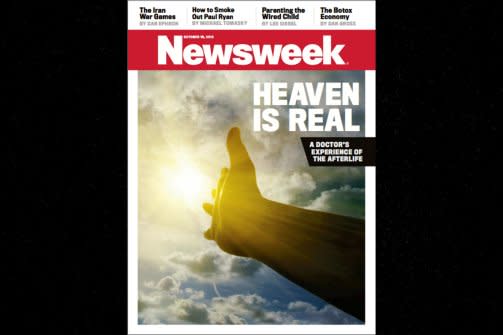 This past October, neurosurgeon Dr. Eben Alexander claimed that “Heaven is Real”, making the cover of the now defunct Newsweek magazine. His account of Heaven was based on a series of visions he had while in a coma, suffering the ravages of a particularly vicious case of bacterial meningitis. Alexander claimed that because his neocortex was “inactivated” by this malady, his near death visions indicated an intellect apart from the grey matter, and therefore a part of us survives brain-death. Alexander’s resplendent descriptions of the afterlife were intriguing and beautiful, but were also promoted as scientific proof. Because Alexander was a brain “scientist” (more accurately, a brain surgeon), his account carried apparent weight. Scientifically, Alexander’s claims have been roundly criticized and, in my view, successfully refuted. Academic clinical neurologist Steve Novella removes the foundation of Alexander’s whole claim by noting that his assumption of cortex “inactivation” is flawed:

Alexander claims there is no scientific explanation for his experiences, but I just gave one. They occurred while his brain function was either on the way down or on the way back up, or both, not while there was little to no brain activity.

In another takedown of the popular article, neuroscientist Sam Harris (with characteristic sharpness) also points out this faulty premise, and notes that Alexander’s evidence for such inactivation is lacking:

The problem, however, is that “CT scans and neurological examinations” can’t determine neuronal inactivity—in the cortex or anywhere else. And Alexander makes no reference to functional data that might have been acquired by fMRI, PET, or EEG—nor does he seem to realize that only this sort of evidence could support his case.