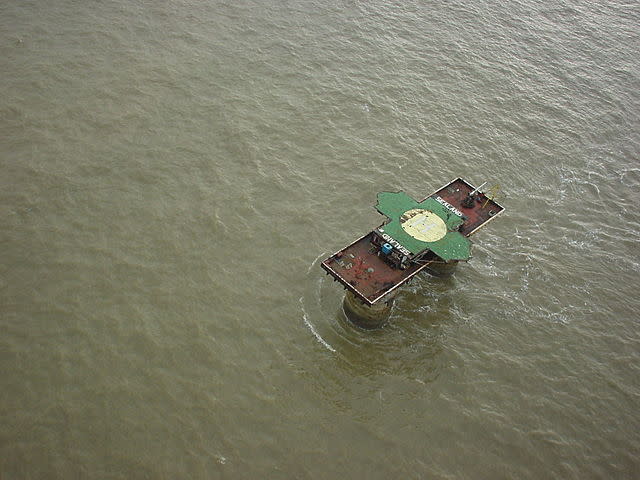 The Principality of Sealand and data haven?

, it certainly seemed fitting but, alas, turned out to be just speculation. That led us to Ars Technica

, where law professor James Grimmelmann has written what is probably the definitive history of Sealand and HavenCo, and it is a thrilling read. A few snippets from nation's short history include a pirate radio broadcaster hurling Molotov cocktails, press wars over "marooned children," and coup led by a former diamond dealer (possibly staged). Grimmelmann has found a colorful cast of characters in the world of cypherphunks, privacy advocates who believe in a borderless internet unfettered by government regulation. Before HavenCo came to Sealand, one of its founders had another brilliant idea:

At the Financial Cryptography conference, Hastings amused and fascinated the other attendees with a data haven variant soon dubbed the "Toxic Barge Project". The idea was to buy a ship, fill the top of the hold with computer se[r]vers and the bottom with the nastiest toxic waste imaginable, then plant yourself in international waters near a major port and start offering co-location services. As Hastings explained, the toxic waste "forces the large military power to protect you from outside threats, while being very hesitant to attempt to board your vessel."

HavenCo was really no more practical than the Toxic Barge Project, and Grimmelmann dissects why the company failed in 2008. If the strange world of data havens leaves you hankering for more, Grimmelman also wrote a 60 page article

(pdf) for the University of Illinois Law Review. And if you're thinking about visiting Sealand yourself, be warned. There are only three routes: helicopter, an "extremely precarious" ladder, or swinging from a bosun's chair