From the beating of our hearts to the chemistry of our brains, scientists are taking advantage of our bodies' natural energy sources. 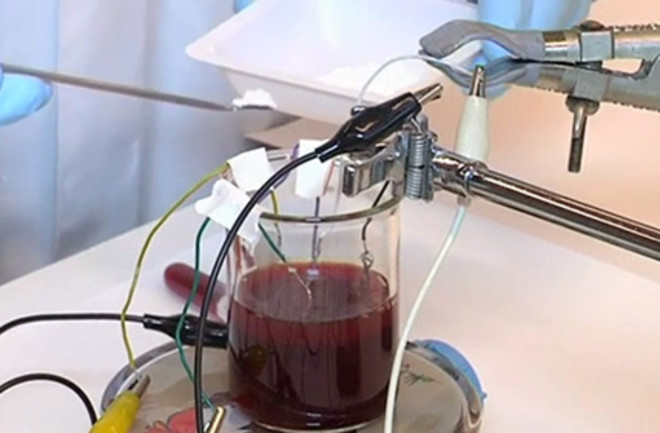 Electrodes extract electrical energy from the glucose and oxygen in this mixture of blood and water. | Reuters

Researchers have long sought to harvest renewable energy from the world around us. Now, scientists are turning inward.

The beating of our hearts, the rush of our blood and the myriad chemical reactions that keep us alive are all potential energy sources. Experts are working to develop technologies that take advantage of the powerful biological ecosystems we already carry around with us.

These tiny strips contain crystals that create an electric current when flexed — each time the heart expands and contracts. In animal tests, electrical output reached 0.2 microwatts per square centimeter, potentially strong enough to power self-contained pacemakers and make battery-replacement surgeries a thing of the past.

With an average temperature of 98.6 degrees Fahrenheit, the human body constantly emits heat. A research team at Korea’s KAIST University used a screen-printing technique to create a flexible glass fabric wristband that turns this thermal energy into electricity.

It produces about 40 milliwatts of energy from a band measuring 10 centimeters by 10 centimeters, which could trickle out a charge to keep a cellphone or smart-watch battery charged.

Electrodes extract electrical energy from the glucose and oxygen in this mixture of blood and water. | Reuters

Two biomedical scientists at the University of Malmo in Sweden created an electric current between two electrodes placed in a solution of blood and water.

Through a chemical process known as reduction/oxidation, one electrode steals electrons from glucose, the natural sugar in the blood, and becomes an anode, which releases electrons. The other electrode becomes a cathode, which gathers electrons, in this case, from oxygen, effectively making the system a blood-fueled battery.

While it’s still a concept in the lab, this biofuel cell could one day work inside the body to indefinitely power pacemakers, the researchers say.

A rendering of where a fuel cell, powered by glucose in brain fluid, might be implanted. | Meninges and Vascular Anatomy/Courtesy of the Central Nervous System Visual Perspectives Project, Karolinska Institutet and Stanford/PLOS ONE/JUNE 2012/Volume 7/Issue 6/e38436

Our cerebrospinal fluid, the shock-absorbing liquid around the brain and spinal cord, is rich in glucose. Some innovators want to use that glucose the same way our bodies do — to create energy.

A silicon fuel cell, which creates electricity from chemical reactions, has a platinum anode that strips electrons from glucose to create energy. The electrons then flow to a cathode, creating an electric current between the two.

The researchers, based at MIT, aim to eventually embed the device in the brain to power implants that could help paralyzed patients regain limb use.