The Beautiful Mind of Freeman Dyson

Thoughts and illustrations from the head of a science legend. 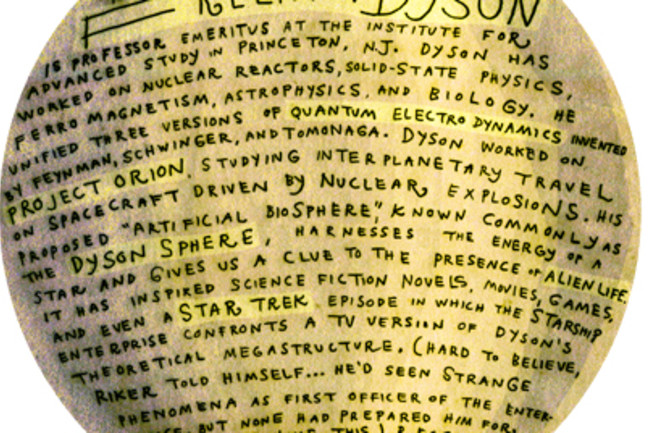 . . .on J. Robert Oppenheimer, director of the Manhattan Project: He was my boss after the war, but he wasn’t much interested in what I was doing because it wasn’t fundamental enough—he had a very narrow view of what science should be. It was very hard to talk to him. He was a restless person. He wasn’t a good listener for that reason. He would always interrupt and start talking about something else. He had this habit of smoking all the time. He would never sit still when he was in a seminar; he would always get up and open the window or shut the window. He was like a 3-year-old. Nevertheless, obviously he could concentrate. When he drove himself to it, he could focus very well, but I didn’t see that very much. Oppenheimer was a very good chairman on committees, and he drove the Manhattan Project through. He took a lot of pride in what he had done. There was a play written with Oppenheimer as the central character, and it displayed him as a sort of remorseful character who regretted what he had done. He threatened to sue the theater and have the play stopped. He said it was a false representation of him—he didn’t want to be portrayed as a sorrowful character.

. . .on the bombing of Hiroshima: I was on my way to Japan when that happened. I was absolutely delighted. I had been working for the British air force, and they had been bombing Germany for five years or so, and then the decision had been made after Germany surrendered to move a bomber force to Okinawa, where we would join the Americans and bomb Japan, and I was going too. By that point I was totally miserable because the whole bombing campaign in Germany had been such a dismal failure. Then suddenly the news came that we wouldn’t be going. I was just delighted that with one bomb you could put an end to all that.

But now we have some rather good evidence that the Russian invasion of Manchuria was really the decisive event. Ward Wilson, who lives nearby in Trenton, educated me about this, having studied it in detail. What’s striking is that we bombed Hiro­shima on August 6, 1945. The Japanese Supreme Council never met. They apparently just didn’t consider the bombing that important. They knew it happened, but it wasn’t worthwhile calling a special meeting. Then the Russians went into Manchuria and the Supreme Council called a meeting within a few hours, because the invasion affected the army. For them, the army was the only thing that mattered. They didn’t care about civilians. The [conventional] bombing of Tokyo had killed more people than Hiroshima, and that didn’t disturb them particularly. Killing civilians was just part of normal business. When they planned the defense of Japan, they were going to send civilians out onto beaches with pitchforks because they didn’t have enough guns to arm all the civilians. They didn’t care how many died; the important thing was to keep on fighting as long as you could. But the Russians moving into Manchuria was a very different business. They saw they couldn’t fight a war on two fronts, with the Russians in the north and the Americans in the south. So in that sense the atomic bombing was unnecessary. Of course we had no way of knowing that then.

. . .on nuclear weapons today: They are terrible, by far the most serious threat to our existence. There are still more than 20,000 nuclear weapons. The United States has about 10,000, and the Russians have about 15,000. There are various other small players, but it’s basically us and the Russians. It’s enough weapons to destroy us both easily. And there is still a huge chance that some stupidity happens and they all get shot out. I still think it’s a far greater threat than anything else we have to face. People have more or less forgotten about it. I think it’s high time we had a new campaign to get rid of them. It’s not hopeless; there is a wonderful precedent with Richard Nixon’s renouncing biological weapons unilaterally.

. . .on the threat of dirty bombs: There are problems there, but they are tiny compared with the big missile stockpiles. People have no sense of proportion. A dirty bomb could certainly be a tremendous nuisance. It could provide income for lawyers for a thousand years, but it wouldn’t actually kill a lot of people. Whereas the nuclear weapons we have could kill millions.

. . .on doing science: When I’m doing science I’m just scribbling on pieces of paper. That’s all it is. On occasion I will compute something on a computer. I’m an old-fashioned mathematician who works with equations. My tools are just a pen and piece of paper. I’m 84, so I’m definitely over the hill. If I were starting today as a scientist, I’d certainly study biology. I’d probably be much better at doing biology today than I used to be, because it is now much more of a theoretical subject. Now you can do biology pretty well with computers. When I was a boy, you had to do wet biology, working with real animals. On the other hand, astronomy is still exciting too, and pure mathematics as well. All three are things I’ve been doing.

. . .on black holes: They are highly significant: Every galaxy has one at its center, and they play a dominant role in the structure of the universe. You can’t understand anything about cosmology without understanding black holes. We now know that they are central to the whole problem of how galaxies are born and grow. Oppenheimer and Einstein missed their importance completely.

. . .on Biosphere II, the experimental closed environment built in the Arizona desert in 1991: I remember going to visit the biospherians in Arizona. They were inside when I visited, and I talked with them by telephone. They were enjoying themselves, but it was very stressful. At the time I saw them, they were very upbeat. But in the end the thing broke down; they had to bring in air from the outside so they wouldn’t suffocate, which was against the whole idea. They were there about the same length of time as a mission to Mars would take, about a year and a half, but from a scientific point of view it was a flop. In a strict way it’s not possible to have a simulation of a trip to Mars. You can do a technical simulation but not a human simulation. How people will get along with each other, you can’t simulate that. When you are on the ground, the whole feeling is totally different than if you were really going to Mars. I think of the old polar expeditions, when they would go off for three years and there would be no radio communication. These people would survive under all sorts of unknown conditions, have amazing adventures no one could possibly have simulated.

. . .on low-cost space travel: It will come, but only when there is a high enough demand so that you can have a “public highway” system. To support today’s air traffic network, you’ve got to have a million passengers constantly on the move. The same will be true in space: It’s not really a technology problem, it’s more a sort of chicken-and-egg economic problem. I hope that it will grow, probably on the back of the military. The military has needs for all kinds of space launching and is prepared to pay for it. So with luck something like this space highway will develop. It doesn’t matter who pays for it initially. In the end it will belong to everybody.

. . .on colonizing space: The main purpose is to provide a place for adventurous people to go. They will all have their different motives. Some will go in order to get rich; some will go to get away from their neighbors. There are all sorts of reasons for going. And I think all of them are valid. The good thing is that they can all be more or less cooperating to develop the system. We also need a lot more knowledge of biology before we can do something like colonize a comet. It would be very nice to build trees that can directly produce liquid fuel and other things from sunlight. The real problem is the low temperature. You’ve got to have a tree that grows a long, long way from the sun in a temperature environment that is just a few degrees above absolute zero. Going out to the comets is probably going to take a couple hundred years.

. . .on the potential of biotechnology: The future of biology is exciting and unknown. The main thing is that the era of molecules is over and the era of organisms is here. The reductionist model was the basis of biology in the 20th century, and it was enormously successful—we reduced everything to molecules. We had DNA and RNA and proteins, and everyone studied molecules. We found out wonderful things. The problem for the next century is putting it all together. We know pretty much what the building blocks are. The question is, how do they actually function? How does the system work as a system? There is a man called Carl Woese [who revolutionized biology with his discovery of the archaea microbes]. His metaphor for biology is a child playing in a woodland stream, poking a stick into the eddies in the water. These eddies always re-form when you disturb them. That’s biology: a dynamic system that you don’t understand. You just poke at it with a stick and it responds and then re-forms itself.