TED Day 2: Where Inspiration Comes From 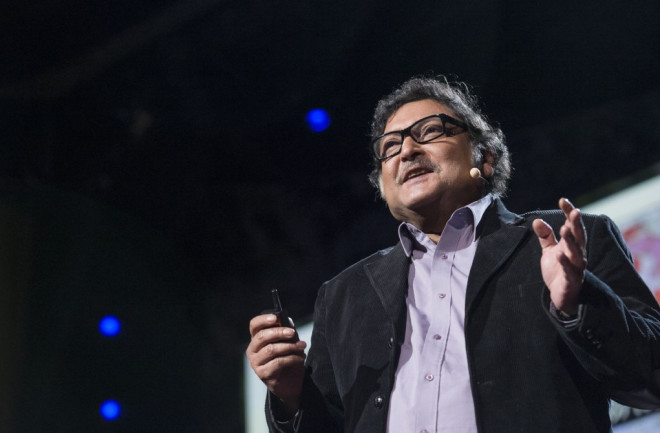 2013 TED Prize winner Sugata Mitra at TED2013. A spark. A vision. A lightbulb over the head. These are the ways we often define that moment of creative inspiration that puts us on a path of making something, whether it’s a knitted iPad case (see Etsy for more examples than you might expect) or something slightly loftier, such as a global education system. Dr. Sugata Mitra, announced Tuesday as the winner of the 2013 TED Prize and the $1 million that comes with it, had that a-ha moment when he was watching children in a Delhi slum learn, and teach each other, how to use a computer he’d put in a kiosk on the street with no instructions. The Hole in the Wall experiment led Mitra to develop SOLE, Self-Organized Learning Environments, and, eventually, his current project, the School in the Cloud. Mitra believes children can learn even complicated ideas and find elegant solutions when they work collaboratively and organically, without rote exercises, unforgiving evaluation tests and guided adult instruction. “The teacher sets the process in motion, then stands back and lets the learning happen,” said Mitra, addressing the Long Beach audience at TED2013 after his win was announced. “And then admires the answer.” Mitra developed his SOLE and School in the Cloud concepts initially for children in poor and remote areas, but his ideas have garnered interest across the globe. He plans to use the prize money to develop the School in the Cloud concept further, including the creation of a controlled environment classroom in India to refine his methods.

Richard Turere, inventor, at TED2013. While Mitra was inspired by the sense of wonder and collaboration he witnessed in poor children, it was a child’s desire to help his family that sparked another innovation celebrated Tuesday on the TED2013 stage. Kenyan tween Richard Turere said he was about six years old when he decided he needed to save his family’s 500-strong herd of cattle, which was frequently attacked by lions. Turere experimented unsuccessfully with both fire and scarecrows before realizing that the lions stayed away if someone was moving around outside with a flashlight. Using a car battery and a few flashlight bulbs, Turere successfully rigged his first set of “lion lights,” which turn on and off randomly, creating the illusion of a human sentinel and discouraging the lions, which now leave the herd alone. The successful “lion lights,” now solar-powered and in use by about 100 families in the area, were a win-win-win: the cattle were spared, the lions were not harmed and Turere, after winning national notice for his low-tech solution, landed a scholarship to the country’s elite Brookhouse International School. Now all of 12, the inventor (who also rigged a car’s engine fan to cool the interior of his mother’s home and engineered a prank toy that delivers a mild shock when touched) says his next big idea is to build a new kind of electric fence and refine his lion lights to deter other kinds of predators, such as hyenas.

Turere said he uses a hammer, nails and whatever parts he can find for his inventions, but Skylar Tibbits and his collaborators are relying on a multimaterial 3D printer to create transformable parts that he’s calling 4D printing. Not high-tech enough for you? Consider another project, his just-launched Project Cyborg, designed for self-assembly of objects on a range of scales, from nano to human-sized. Tibbits told the Tuesday TED crowd that he believes the technology will usher in a new era in manufacturing.

Taking a different approach to a similar theme, roboticist Rodney Brooks provided a demonstration of Baxter, a robot designed to work alongside, and be taught by, assembly line workers. Truth be told, Baxter seemed a little distracted as he was put through his paces—Brooks chalked it up to a problem with the stage lighting—but it could have been a case of stage fright. Or just being starstruck, what with Bono waiting in the wings and all. Yes, the U2 frontman-turned-“factivist,” also part of Tuesday’s TED lineup, took the stage proudly declaring “applause is my drug” and then eliciting it from the crowd with one zinger after another. After declaring “I have embraced my inner nerd,” Bono revealed, “I’m sexually aroused by collating data.” Although Bono’s talk focused on impressive progress in bringing people out of extreme poverty and reducing childhood mortality, it’s a safe bet that his dataphilic comments will be tried out by more than one nerd in the audience as a happy hour pickup line.

Creativity in all its forms

Neuroscientist Stuart Firestein, another TED talker and author of Ignorance: How It Drives Science, suggested a kind of ignorance-based creativity is the foundation to acquiring real knowledge. “In science, knowing a lot of stuff is not the point,” said Firestein. “The purpose of knowing a lot of stuff is to be able to frame and ask good questions.” Juan Elias offered a more cautionary tale of creativity when discussing tattoos. Digital tattoos. Every time you create something online—a snarky tweet, an ill-advised Facebook photo album of last night’s party, a YouTube video of your take on Gangnam Style, whatever—that information becomes a digital tattoo, marking you so permanently that Elias considers it a kind of immortality that will long outlive you. A final note on creativity and its many forms: Max Joseph and Wander Films nailed it, scoring an award for their 2012 ad for the Rainforest Alliance, a must-see send-up of inappropriate do-gooding that vied with Bono for highest-density of one-liners during Tuesday’s TED (including “The world is falling apart at the seams and all you’re doing is yoga.”). The annual TED conference, which turned 29 this year, features speakers from multiple disciplines delivering brief talks (four to 18 minutes long) on innovations and ideas in the areas of technology, entertainment and design. Presenters and audience members have a broad and international range of experiences, and include renowned scientists, visionaries, celebrities, artists, venture capitalists and corporate leaders.