TED Day 1: Transforming the Way We See, Hear and Feel the World 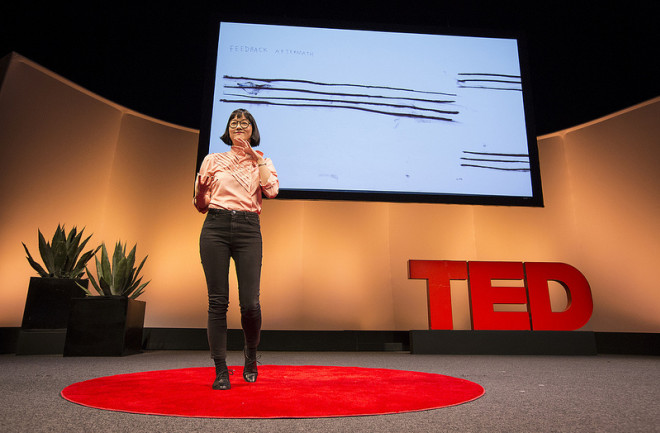 Christine Sun Kim, sound artist and composer, speaks (in ASL) at TED Fellows Talks during TED2013. Asked to describe the five senses, most of us can rattle them off without hesitation: sight, sound, smell, taste and touch. But what do those words mean, and do they mean the same thing to every person? Take sound, for example. Randall Poster, who has worked as a music supervisor on movies ranging from School of Rock and Velvet Goldmine to Moonrise Kingdom, believes the inherent audience experience of a score or soundtrack has changed. While researching music for the HBO series Boardwalk Empire, Poster unearthed a treasure trove of “photoplay music,” sheet music written for the musicians performing live at local nickelodeons in the silent film era. The titles of photoplay compositions—“In a Merry Mood” and “Agitato Mysterioso,” for example—reveal the emotional response from the audience that the music would provoke. It’s a response, however, that makes assumptions about its audience's culture. “Music renders the collective psychology of the moment, of the human condition,” said Poster, speaking at a seminar Monday at the TED2013 conference in Long Beach, Calif. “But what sounded suspenseful in 1920 may not sound suspenseful today.” The audience experience of—and response to—music in a movie changed when the “talkies” arrived, though Poster cited several films from the ’60s notable for the score’s starring role. Consider, for example, the long opening scene of Dr. Zhivago or the musical intermission in Lawrence of Arabia. Those were cinematic moments that likely would not resonate with a modern audience. “The contemporary audience is so impatient. We forgo the opening title scene now. They want to get right to the action,” said Poster.

Christine Sun Kim stands on the TED stage. The musical duo BLUEBRAIN, comprised of brothers Ryan and Hays Holladay, is taking a different musical path to reach their audience. The pair create multichannel sonic maps of places such as the National Mall in Washington, DC, and in an upcoming project, the Pacific Coast Highway. What someone using their app hears will change as the individual moves through the landscape. As a listener nears the Washington Monument on the Mall, for example, a chorus of human voices joins an orchestral swell, but two people approaching the landmark from different directions will hear different layers of sound, each journey’s soundtrack dependent on the individual’s position and pace. And the meaning of sound can be even more elastic. Deaf artist Christine Sun Kim describes herself as a “sound engineer.” After years of conforming to the expectations and behavior of the hearing world, Kim realized her experience of both sound and silence was so different that she needed to “unlearn sound etiquette.” Kim’s projects have included seismic calligraphy—“painting” by using vibrations to move brushes—and an exploration of the musical symbol known as “piano,” which indicates when an instrument should be played more softly. “Silence is inherently used to shape sound,” explained Kim, a TED 2013 Fellow, adding that, while important, a deaf person’s concept of silence was profoundly different than that of a hearing person.

Do you see what I see?

Another TED2013 Fellow, Miriah Meyer, works with researchers to help them visualize their findings in more sophisticated, often more illustrative ways. “Visualization isn’t just about pretty pictures,” Meyer said. “It’s a deep investigation into sense-making.” Programs such as MizBee, which enables multi-scale visual analysis of comparative genomic data, can speed up the pace of a study or yield unexpected connections that might not have been apparent using conventional graphs and charts. If interaction designer and TED2013 Fellow Jinha Lee has his way, the boundaries we see between the physical and digital will soon be erased. After creating a pen that allowed designers to draw three-dimensional images on a two-dimensional screen with startling clarity, Lee has been re-visualizing the entire computer workspace to include the ability to virtually reach into a screen.

Eric Berlow & Sean Gourley, an ecological networks scientist and a military physicist, speak about their joint project at TED Fellows Talks during TED2013. Physicist Sean Gourley and ecologist Eric Berlow, also part of the TED 2013 Fellows class, are collaborating on another new way to see: the meme-ome, a model revealing the mathematics underlying an idea. The pair demonstrated an example of a meme-ome based on the online viewership of every TEDTalk available online: a multi-colored, three-dimensional network of data points that looked a little like a melted LEGO project wrapped in a spiderweb. Zooming in on various aspects of the meme-ome, however, Gourley and Berlow demonstrated how the model could reveal connections: Women, for example, were more frequent viewers of videos that emphasized hope and optimism, as well as health and the environment. And if you’re wondering, Gourley and Berlow collected their data from YouTube’s viewer demographics. So you might want to think twice about who’s taking notes before you watch that cat on a Roomba video for the 16^th time today. The annual TED conference, which turned 29 this year, features speakers from multiple disciplines delivering brief talks (four to 18 minutes long) on innovations and ideas in the areas of technology, entertainment and design. Presenters and audience members have a broad and international range of experiences, and include renowned scientists, visionaries, celebrities, artists, venture capitalists and corporate leaders.