Robert Fischell says matter-of-factly that what he does is simple, pragmatic stuff, although one of his inventions may have saved more than 65,000 lives. That contrast is evident everywhere in his life: He can sit back and sip ice tea on a quiet summer afternoon, but he is also driven to change the world. At 74, retired from his position as a principal staff physicist and chief of technology transfer at the Johns Hopkins University’s Applied Physics Laboratory, Fischell still puts in 60-hour workweeks, cranking out innovative ideas. “Every day I wake up wanting to invent,” he says. 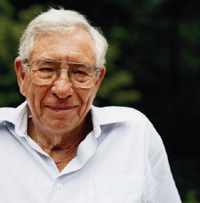 Robert Fischell's gift was to see that a cardiac pacemaker was much like a tiny satellite traveling within the atmosphere of the human body, an insight that led him to medical patents that have saved countless lives.

Fischell trained as a physicist, and for 15 years at Johns Hopkins he worked with NASA on developing and improving the reliability of space satellites. But he found his calling in the late 1960s as he began to identify and build bridges between the world of satellites and the world of medical devices. As an inventor, Fischell sees connections and analogies that most people do not see. He looked at the idea of an implantable heart defibrillator and saw something like a satellite in space-a remote mechanism that needed to be controlled from afar while it gathered, stored, and transmitted information about an interesting phenomenon—in this case, the heart.

His career as a medical inventor was launched the day he spotted an advertisement for pacemakers with batteries that had to be replaced every two years. He told a cardiologist friend at Hopkins that he could build a smaller unit, one that would run, as satellites did then, on a rechargeable nickel-cadmium battery that could last almost indefinitely. Three days later, he and his colleagues at the lab had built an effective prototype that changed the way pacemakers were built. “I became enthralled,” he says now. “Satellites were great fun, but the prospect of saving lives felt more important.”

Fischell now holds 117 licensed medical patents, including a radio-controlled rechargeable pacemaker, an implantable insulin pump, and a wide variety of stents designed to hold obstructed arteries open. But for sheer dramatic impact on humankind, the development and refinement of the implantable cardiac defibrillator leads the list.

Ventricular fibrillation, whether brought on by myocardial infarction or as the result of chronic instability of the heart’s rhythm, is a killer. Instead of beating with a steady, controlled synchronous beat, the heart quivers. It gets no oxygen, pumps no blood, and unless the pattern is reversed, the patient dies. The implantable defibrillator is a lifesaver. The device consists of a tiny computer that monitors the electrical signal of the heart’s rhythm, leads that are attached to the heart, and a battery to power the whole operation. When the computer detects that the signal has stopped or gone awry, the device sends out a corrective jolt, forcing the heart to return to its normal rhythm.

The idea for the defibrillator first came to Michel Mirowski, a physician in Israel whose mentor, Harry Heller, died in 1966 of a heart attack brought on by malignant ventricular arrhythmias. Grieving for Heller, Mirowski asked whether his death might not have been preventable. He reasoned that a miniaturized, automated defibrillator could have saved Heller and might save others. He moved to the United States and began working on a device with Morton Mower, a cardiologist, at Sinai Hospital in Baltimore in 1969. Their prototype was insufficiently reliable and so bulky that doctors would have had to implant it in the abdomen. However, in animal testing, it worked.

Mirowski and Mower brought their defibrillator to Fischell and his team at the Johns Hopkins Applied Physics Lab in 1978. Fischell says he saw the potential of the device immediately, but he also saw that it wasn’t ready for use in humans. His task was to make the device smaller, more communicative, and more dependable. At that time, Fischell was also chief engineer of the Hopkins space technology program. He saw similarities. “There was a great analogy between the two. We could use an implantable defibrillator in much the same way we used a satellite,” he explains. “With a satellite, you can’t touch it because it’s too far away, and with the defibrillator, it’s the same thing because there’s a skin barrier and it’s hidden in the body. Both could be programmed by radio waves, and both could send data back out to us by radio waves.” Fischell added a command and telemetry component to the defibrillator so that a doctor could study how the heart had malfunctioned after the fact.

Fischell added more than just space-based mechanics to the defibrillator. As Mower explains, he also “put the device through tremendous paces and tested it up one side and down the other.” Working with reliability tests first used in preparation for satellite launch and orbit, Fischell subjected the defibrillator to sustained vibration trials and temperature-cycled it from zero to 150 degrees Fahrenheit.

Since it was first implanted in a human 23 years ago, the defibrillator has rendered drug treatment for the prevention of fibrillation obsolete. The survival rate when using defibrillators is almost 10 times better than the survival rate with medication. The reason, Fischell says, is simple: “Fibrillation is an electrical problem in the heart, not a chemical problem.”

With the help of his sons David, a physicist, Tim, a cardiologist, and Scott, an M.B.A. who handles the business side of things, Fischell is at work on three projects. He’s developing a transcranial magnetic stimulator to cure migraine headaches, another implantable device that will signal a heart attack even before symptoms manifest, and a tiny computerized mechanism implanted in the cranial bone that will anticipate and short-circuit epileptic seizures. Speaking of this last, Fischell says, “Some patients with epilepsy have 10 to 50 seizures a day—they have no lives.”

Fischell gets great pleasure when patients benefit from his inventions. But he has also been hounded and driven by self-doubt over the years. “I think one reason I’m a successful inventor is that my parents just absolutely ignored me,” he says. “They had no comprehension of me and what I was doing. I grew up feeling very insecure about myself. I was going to prove to the world that I was OK.” Only in the last few years has he allowed himself to appreciate his own achievements: “I’ve started to look around and think maybe I am OK.”

“This is the best time of my life,” he says. “I think I’m probably one of the luckiest people ever born, actually. I’ve been able to invent. I’ve had a world-class wife for 52 years who created beautiful children who’ve joined with me to create things that have aided mankind. What more could a person want?” But he still goes to work every morning. “Retire? No, no, no. They’ll have to carry me out feet first.”