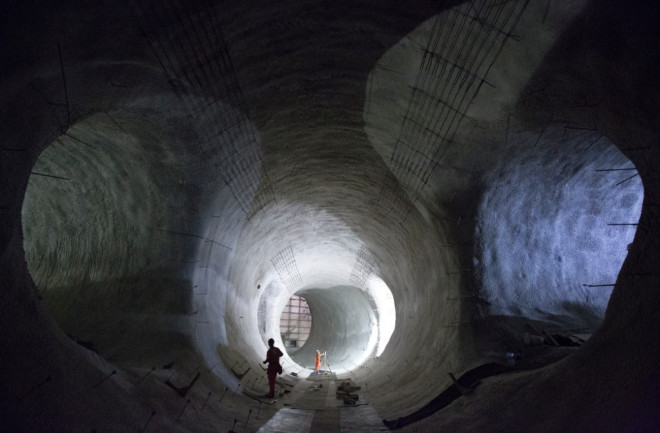 Platform tunnels at the new Crossrail Bond Street station. (Credit: Crossrail) Since 2012, more than 10,000 construction workers have been laboring underground to finish London’s ambitious Crossrail project, and now we can get a sneak peek. The Crossrail won’t open until 2018, but workers recently finished the digging the 13-mile underground portions of the Crossrail. And thanks to a BBC aerial photographer, we can tour the Crossrail’s freshly laid tunnel system, which is still closed to the public.

It may surprise people to see just how cavernous this underground system actually is. Eight giant tunneling machines, weighing 1,000 tons apiece, did the digging, and more than seven million tons of earth were excavated during construction. When fully operational, trains will carry 200 million passengers in and out of London per year, and increase the city’s rail capacity by 10 percent. While the drone footage is awesome, it's also worth noting that the machines doing the boring are far from boring. (Hah!) The machines are essentially large metal cylinders — the length of 14 London buses — with cutting wheels and debris scrapers at the head. As the long machine bores into the earth it also places concrete slabs to create the circular tube segment. Each machine — the project used eight in total — tunneled around the clock with a team of 20 workers at the helm. The pilot, Jon Bontoft, filmed the tunnels with a DJI Phantom 2 quadcopter equipped with a GoPro. It’s an impressive feat of engineering that’s appreciated all the more through the lens of quadcopter. If you’re interested to learn more about the Crossrail project, check out the extended video below.